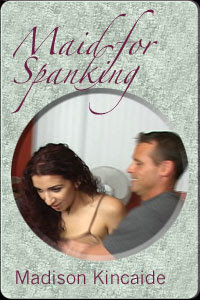 Here’s an excerpt from my bestselling contemporary spanking romance Maid for Spanking written under the name Madison Kincaide!

Working alongside Steven Hughes was actually much more enjoyable than Colleen had thought it would be. It was a little awkward the first couple of days, but the more time she spent with him, the more she began to realize that he wasn’t such a bad guy. A little paranoid about security, and obsessive about cleaning, but not the jerk she’d originally thought he was. And since she’d started working with him, he hadn’t spanked her once. Not even when she’d forgotten his no-food-allowed-near-the-computers rule and brought a non-fat latte and a container of yogurt that she’d gotten at Starbuck’s into the office.

“But I used to eat at my desk all the time at work,” she protested when he made her go sit at the kitchen table.

“And I’ll bet you had crumbs all over the keyboard,” he said, folding his arms and leaning back against the counter.

Colleen formed her lips into a pout as she dipped her spoon into her yogurt. “You’re no fun at all, do you know that?” she muttered.

Steve studied her for a moment, then his mouth quirked. “You’d be surprised.”

Something in his voice made her pulse skip a beat, and she paused, her spoon halfway to her mouth. What the heck was going on with her?

She’d thought he was gorgeous the first time she’d seen him, and working side by side with him every day had only intensified her attraction to him. Which surprised her a little, since he was so different than the guys she usually went out with. While the men she’d dated had all been good looking and smart, like Steve, none of them would ever have done something as manly as putting her over their knee and spanking her. Which was why Steve was such a contradiction, she thought. Not many men could be all sensitive and intellectual one minute, and then go all caveman the next. And even though it seemed crazy, she was beginning to think that the reason she might in fact attracted to him was because he was that unique mix of sensitivity and strength. And she was attracted to him, she admitted to herself. Crap, she thought suddenly, it was even worse than that. She was starting to actually like him. And those feelings had certainly been wreaking havoc on her concentration in the two weeks she’d been working with him. If it had just been a sexual attraction to a good looking guy, it would have been one thing. But there was another component to her
distraction…the spanking fantasies.

Every time he leaned close to show her something or read the string of code she was working on, all she could think about was how well-muscled his arms were, or how good his cologne smelled, or how strong his hands were. Which ivariably led to thoughts of him putting her over his knee and spanking her.

She tried to banish those thoughts, but the harder she tried, the stronger her fantasies became. Before long, everything he did seemed to inspire a naughty panking fantasy. Colleen couldn’t believe how vivid the fantasies had become, either. A month ago, she never would have thought about getting spanked, and now, it seemed to be all she could think about. She couldn’t help but wonder what that said about her. Why did she seem to crave another spanking from Steven Hughes?

But no matter how long she wrestled with that question, she couldn’t come up with an answer. She just knew that the more time she spent with Steve, the stronger the urge became.

And don’t forget to stop by next Wednesday for my vision of the hunky Steven Hughes!

Another great excerpt!! Can’t wait to see what trouble she gets herself into! lol!

Deb – Thanks so much!