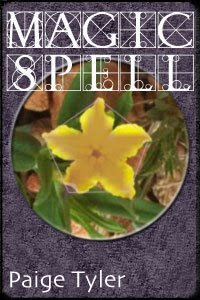 Here’s an excerpt from my bestselling time-travel paranormal spanking romance The Magic Spell!

“You can send him back, though, right?” Alanna asked.

Mijanou regarded her in silence for a moment before answering. “If that is what you both want by the time I figure out how to do so, then yes.”

What did she mean, if that was what they both wanted? Alanna wondered. Of course, it was!

“What about the part of the spell that won’t let us get more than twenty feet from each other?” Alanna persisted. “Can you do something about that right now?”

The woman’s lips curved into a smile. “I am afraid not, my dear,” she said. “For now, you will have to learn to enjoy each other’s company.”

Alanna wanted to groan. What the heck was she going to do with a seventeenth-century pirate while the shop owner came up with a spell to send him back? It’s not like she could take him to work with her.

Giving the woman her phone number, Alanna left the charm shop along with Garren and Hollie. As they walked back to the car, she noticed that he was getting a lot of stares from passersby as they went. Though some of those looks were due to the fact that he was positively gorgeous, others had to do with the clothes he was wearing. Even here in San Francisco, they made him stand out. He couldn’t keep going around like this.

Announcing that they were going shopping, Alanna drove to the nearest mall. Though she would rather have just sent Hollie into the store to get Garren some clothes, she knew that there was no way the other girl would get something that would fit him. So, ignoring the odd looks they got, Alanna led the way into the mall.

While Garren looked around the store in wonder, Alanna chose a pair of jeans and two long-sleeve button-up shirts that looked like they could be the right size and pushed them into his arms, then sent him into the dressing room.

When he came back out, wearing the jeans she had picked out and with the shirt halfway unbuttoned down his muscular chest, Alanna just stared at him for a moment. Daaaamn! she thought. If she didn’t know better, she’d think he just stepped off the cover of GQ.

Ignoring the flutter in her pulse, Alanna paid for the purchases while Garren stuffed his breeches and shirt in the bag the awestruck female clerk handed him.

Back outside, Hollie suggested they stop at Starbuck’s on the way back to the car, and as they walked down the sidewalk past the various shops, Alanna felt an abrupt yank as Garren stopped to look in one of them. At the limit of their twenty-feet tether, she stumbled a little and turned to see what had captured his interest this time.

“Bloody hell!” he muttered, his expression dark as he stared at something in the store window.

“What is it?” Alanna asked.

He gave her a sidelong glance. “That is mine.”

Her brow furrowing in confusion, Alanna looked up to read the sign above the store. Grayson’s Antiques, it read. “What are you talking about?” she asked Garren.

He pointed at the ornate looking box one of the shelves. “That is mine,” he said. “I had it made for me in Port Royale. See, it has my initials worked into it in silver.”

She leaned closer for a better look. It was very nice looking, but she couldn’t imagine what the heck he would want with it. It looked like a jewelry box to her. “Well, it belongs to Grayson’s Antiques now,” she said. “So, come on.”

Without waiting to see if he would follow, Alanna turned to go and was immediately jerked back. Muttering under her breath, she whirled around to find the pirate determinedly trying to make his way to the door of the antique store.

“Just what do you think you’re doing?” Alanna demanded, digging the heels of her boots into the sidewalk.

He gave her a superior look. “I am going to get my property back.”

She glared at him. “I’m not paying good money for some old piece of junk,” she told him firmly.

His mouth quirked. “Who said anything about paying for it?”

Turning on his heel, Garren started for the antique store again, but Alanna grabbed onto the parking meter with one hand, refusing to budge. Eyes narrowing, he spun around to face her.

“Stop this foolishness, wench, and let me go in there,” he growled.

Alanna lifted her chin. “I will not let you go in there and steal that thing back,” she told him firmly.He clenched his jaw. “Why not?” he demanded. “It is mine.”

“Not in this century it isn’t!” she shot back.

Garren stood there scowling at her for so long that for a moment Alanna thought he might actually pick her up, throw her over his shoulder, and carry her bodily into Grayson’s Antiques. But he only swore under his breath, gave the thing in the store a regretful look and strode over to her.

“You are lucky I do not put you over my knee right here, wench,” he told her as he stalked past. “I thought you would have learned your lesson the first two times I did so, but apparently you did not.”

Hollie, who had been watching the whole exchange with amusement, now looked at her wide-eyed. “Did he just say what I think he did?” she asked.

Alanna’s face flamed. “Of course not!”

With that, she hurried past the other girl to catch up with Garren before her friend could press her on the subject. She only hoped that Garren wouldn’t say anything else about it. It was bad enough that she knew she’d been spanked. It would be completely mortifying if Hollie found out about it.

And don’t forget to stop by next Wednesday for my vision of the hunky pirate Garren Dandridge!

Great excerpt! This is one of my fave books!! 😉

That looks really cute, I’ll have to add it to my TBR pile. What an interesting minxy-mix – pirates, spells and spanking! I like it! *hugs*

~Heather – Thanks so much! I’m so glad you enjoyed reading it!

Gwen – Oooh, cool! Thanks so much! It’s a fun story! You’ll have to let me know how you like it!