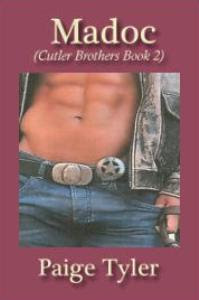 Madoc, Book Two of The Cutler Brothers is here!
After attending his brother’s wedding, U.S. Marshal Madoc Cutler knows one thing for sure – there is absolutely no way he would ever fall for a woman as quickly as his brother did.
But he can certainly appreciate an attractive woman, and when he comes across a beautiful waitress at a small-town diner, he can’t help but notice her. However, things become complicated when he recognizes her as the runaway fugitive, Shayna Matthews. Even though he is in the middle of nowhere, she’s wanted for embezzlement and suspicion of murder, and it’s his job to bring her in. Shayna puts up more fight than he expects though, and he has no choice but to put her over his knee for a sound spanking until she agrees to come quietly.
His plan to quickly transport her back to Denver to stand trial goes awry however, when a snowstorm forces them to take shelter in tiny, secluded cabin in the woods. Madoc’s vow to maintain his professionalism is sorely tested the more time he spends with the alluring fugitive.
Madoc is torn. Should he do his duty and turn Shayna in, or should he follow his gut instinct and risk his career and freedom to help her clear her name? And could he possibly have been wrong about not falling for a woman as quickly as his brother did?
Read an Excerpt!
Buy Now!
*hugs*
Previous Post Tagged! Next Post Thursday Thirteen!

I so can’t wait to read this series! lol! Looks like Shayna finds herself in some spankin’ trouble! 😉

~Heather – LOL! Does she ever! You have to let me know how you like it!