If you like stories with a hero and heroine who fall head over heels for each other the moment they meet, you’re in the right place because I’m giving away a copy of my EPIC Award Finalist ANIMAL ATTRACTION, the first book in my Alaskan Werewolves Series! Hunter McCall and Eliza Bradley meet in a diner when she asks if she can borrow the bottle of ketchup from his table. It’s love at first sight for both of them. Which wouldn’t be a problem if Hunter weren’t a werewolf!

The giveaway is open to anyone and everyone (US, Canada and International) with an email address! To enter, leave a comment along with your email address. I’ll announce the winner on the 24th! 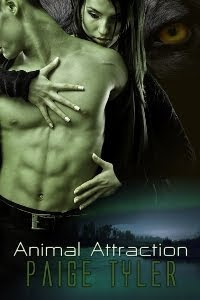 Not only are werewolves real, but they’re damn hunky, too!

Frustrated when none of the real newspapers will hire her as a reporter, Eliza Bradley takes the only job she can get – at a paranormal magazine. Her first assignment takes her to Fairbanks , Alaska to investigate the possibility that a werewolf has killed two local hikers.

“Anything else I can get for you folks?” she asked.

Eliza glanced down at the table before looking up at the waitress again. “Ketchup?”

The woman nodded. “There’s a bottle on the table right behind you, sugar. Enjoy your dinner.”

Eliza had expected the woman to bring her a new bottle of ketchup, or at least grab the one off the other table for them, like waitresses in most restaurants would usually do.

Maybe it was a diner thing. Or an Alaska thing. Either way, it seemed she would be going to get her own bottle of ketchup.

Taking her napkin off her lap and placing it on the table, Eliza pushed back her chair and got to her feet. When the waitress had told her that there was a bottle of ketchup on the table behind theirs, she had naturally assumed it was unoccupied,so she was surprised to see a man sitting there. And not just the average, run-of-the-mill guy she’d expect to find in a diner either, but a mouth-watering specimen of a man. Her breath caught as she found herself stopping right there in the middle of the diner to stare at him She had read in Cosmo once that there was something different about Alaskan men, that living in the great white north made them more masculine and sexy. Staring at the man seated at the table, she could well believe it.

Thank goodness he was intent on whatever he was reading on the laptop in front of him, because he would surely think she was a freak standing there staring at him with her mouth hanging open. But good heavens, with that thick, dark hair, chiseled, hair-roughened jaw, and wide, sensual mouth, how could any woman not be mesmerized?

Abruptly realizing how idiotic she must look just standing there, Eliza finally forced her feet to move. As she neared his table, the man looked up from his laptop and she felt her breath hitch as his gaze met hers. She’d never seen eyes like his before. Not quite brown, but not really hazel, either, the only way she could think to describe them was gold. And the sexiest pair of eyes she’d ever seen. The heat from them mesmerized her, pulling her into their depths, and suddenly she found it very hard to breathe.

When he lifted a brow in question, she finally managed to break out of her trance. “I, um, was wondering if I could steal your ketchup,” Eliza stammered, her face coloring. “We don’t have any,” she added, glancing back at her table.

The man followed the direction of her gaze, his gold eyes settling on the photographer for a moment before he gave her a smile. “Sure.”

Picking up the bottle, he held it out to her. As she reached for it, her fingers brushed his and she almost gasped as the most amazing sensation swept through her. It was as though she’d just gotten completely and thoroughly kissed. Her knees felt weak and there was a delicious little flutter in her belly that left her breathless.

It was then that she realized she hadn’t actually taken the bottle of ketchup yet. She was just standing there touching him like a doofus. She tried to cover her bizarre behavior by grabbing the bottle, but all she did was almost knock it out of his hand. They both fumbled with the thing for a moment before she finally gained control of it.

Could she be any more lame? She could already feel the heat rushing to her face.

“I think your boyfriend’s waiting for the ketchup,” he said when she continued to just stand there.

Eliza’s brow furrowed in confusion at the word “boyfriend,” but then she realized he must be referring to the photographer.

She forced her attention away from the pleasant warmth that still swirled between her thighs and gave him a smile. “Oh, you mean Andy. He’s not my boyfriend. We just work together.”

Oh God. Did he think she was trying to come on to him? Crap, she really needed to go back to her table before she did something else to embarrass herself. But she couldn’t seem to make her feet move. She had a crazy urge to reach out and touch him again to see if that same sexual spark would happen. Resisting the impulse, she instead reached up to tuck her long, dark hair behind her ear. “But you’re right. He is probably waiting for the ketchup.”

Giving the man another smile, she forced herself to turn and walk back to her table. Halfway there, however, she couldn’t resist glancing over her shoulder to take one more look at him. He was regarding her with those incredible golden eyes of his, and her pulse fluttered wildly at the intensity in his gaze.

What was going on with her? She’d never experienced anything like this in her life. She had to get control of herself. Giving him one more look over her shoulder, she turned and stumbled back to her seat in a daze, clutching the bottle of ketchup in her hand.

Across from her, Andy lifted a brow as if to ask, what the hell is wrong with you? When she didn’t say anything, he prompted, “You just going to sit there and hold that all night, or can I use the ketchup?”

She blinked. “What? Oh, yeah. Sorry,” she mumbled, handing it to him.

Eliza watched as the photographer dumped ketchup on his onion rings, and then began to dig into his meal. She knew she should be doing the same, but she couldn’t stop thinking about what had just happened. Her heart was still racing as if she’d just come back from a run. Or had just finished having some really great sex. Good heavens, and all of that was from a mere brush of the fingers. She couldn’t keep herself from wondering what it would have been like if he really had kissed her.

It was a long time before Eliza could focus on her food, and by then, she realized she wasn’t really hungry anymore, at least not for food anyway.

To check out the second book in the series, ANIMAL INSTINCT, visit my website at https://www.paigetylertheauthor.com

This one looks awesome! It's going on my wish list. Thanks for the giveaway.

Looking forward to reading this one! Love your books.

Loved that excerpt..the book is going on to my TBR list!
Hugs xx
foulkes.susan@gmail.com

Love the excerpt! And I found a book of yours I haven't read. I've been to busy reading you badge bunny books over and over again :-)!

Oops, I forgot to leave my email address:
reneeroseclosetgirl at gmail

MMMM….love the sound of this book. Thanks for the chance to win it.

How can a werewolf NOT be hunky? 😉

Wolf shifters are my favorite paranormal creatures. It sounds like a story I will love.

I love Shifters! There So HOT!
Want it!

Thanks for the give-a-way.
Yvette
yratpatrol@aol.com

The blurb sounds fantastic, thanks for the opportunity.

I've been very curious to read some more shifter books – I hope you are offering a print copy.
sallans d at yahoo dot com

Sounds wonderful! I love "love at first sight" stories…so romantic 🙂
Thanks for the chance to win!

Sounds like a great read.Thank you for this chance to win .Have a fantastic weekend
flanagan@Mebtel.net

I can't wait to read this book…

This book sound really good! Thanks for the chance to win it!
suz2(at)cox(dot)net

Nothing is better than a hot hunky werewolf story! Can't wait to read this one!

Thanks for the giveaway this book is new for me…would love to read it! 🙂

Thanks for the giveaway
krisz.night@yahoo.com

Sounds like a great read. Thanks for being part of the hop.

Thanks for the amazing giveaway!
elizabeth @ bookattict . com

Enjoyed the excerpt and would love to read the book it sounds really good!
Irene
irgl7(at)bonzo15(dot)plus(dot)com

Added to my tbr list…that cover is sexy!!!!

Thank you for participating in the LOVESTRUCK GIVEAWAY HOP & offering such a Fantastic Giveaway!!!

I just Loved your Excerpt from "ANIMAL ATTRACTION", but when don't I Love one of your Books? 😉 Yea know I was thinkin' the other day, we should have a Paige Tyler Badge Bunny Club LOL because ***fan self*** they are just sooooo darn Scorchin' HOT, I know you have to have alot of Badge Bunny Fan out there that you've melted their panties off while reading your Books. LMAO 😉 I know, I ALWAYS sooooo Bad!! Naughty Me!!! LOL

I would very much appreciate the opportunity to be considered in your very generous giveaway of a copy of your EPIC Award Finalist, "ANIMAL ATTRACTION", Book 1 in your Alaskan Werewolves Series. I can't wait to read Hunter and Eliza's Super Smexy Story.

This sounds really good. I am going to have to put it on my TBR list. I love paranormals, especially hot ones 🙂
manning_j2004 at yahoo dot com

Wow! I love it! I am adding it to my TBR pile. 😉 Thank you for sharing and for the giveaway.
trb0917 at gmail.com

Wonderful excerpt I can't wait to read it.
sstrode at scrtc dot com

I loved the book excerpt. Thanks for being a part of this FUN blog hop. I have added your book to my book wish list.

Thanks so much for the comments, everyone! So glad you enjoyed the excerpt!

The winner of ANIMAL ATTRACTION is Tina B!

Thank you so much, Paige!!! I am really looking forward to reading it!

Tina – Yay! You're welcome! Let me know how you like it!