There’s a blog hop this weekend, and you know what that means. Hot hunks, cool prizes and yummy excerpts! You could win some very sexy books, including one from me – your choice! But you MUST comment on this blog to win! Oh, and be sure to leave your email address!

And if you’re looking for a fun, sexy beach read, I hope you’ll pick up my newest release, HANDS-ON TRAINING, the fifth book in my Badge Bunnies Series! If you haven’t read the others yet, not a problem because you can read the books in any order you like!

After you read the excerpt, don’t forget to check out my hot hunk! 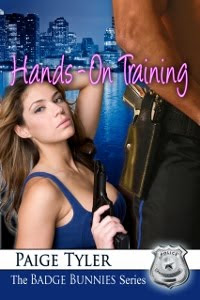 Who knew shooting a gun could be so much fun? Give a whole new meaning to the term keep your weapon pointed in a safe direction at all times.

“You seemed comfortable handling the weapon when it was unloaded. It wasn’t until you got on the line with a loaded weapon that you started having a problem, so I think we should start there.”

Trista groaned inwardly. The possibility of romance was dropping by the second here. Blake seriously thought she wanted a firearms lesson.

She picked up her pistol. “Should I just start shooting at the target?”

“Let’s work on your stance first and get you comfortable with the weapon. Then we’ll do some shooting.”

Trista turned to face the target—feet together, pistol held in both hands with arms fully extended at shoulder height. “Like this?”

“Not quite.” Blake lifted his hand, then stopped. “Do you mind if I touch you? It’s easier to show you than to tell you.”

“Go ahead.” She had to fight to keep the grin off her face. “If you think it will help.”

Her pulse quickened as Blake went around to stand in back of her. Without a word, he placed his boot in between her feet, gently nudging them apart. When she automatically spread her legs, he slipped one of his between her thighs to widen her stance. When she’d said she wanted Blake between her legs, this wasn’t what she’d had
in mind. Not that she was complaining. She’d take him any way she could get him.

He wrapped his arms around her and clasped her hands in his. He was so big and strong she couldn’t help but feel tiny in his embrace, and it was all she could do not to moan as the hard planes of his chest pressed against her back. She knew he was only demonstrating the proper stance to help her shoot better, but at the moment, all she really cared about was how the contours of his body fit hers.

“See how much more stable you are in this position?” Blake’s voice was right next to her ear. “Wider is always better.”

She couldn’t agree more. “I see that now.”

Unable to help herself, she pushed her ass back until she brushed against something firm and unyielding. She was pretty sure it wasn’t his belt buckle.

“Relax your arms some,” he instructed. “Your shoulders are really tense.”

She obeyed, wiggling back a little more as she let her arms relax. This time, her ass definitely met with resistance. If that was his cock she was rubbing up against and not a weapon of another sort, then Blake wasn’t quite as professional as he wanted her to think. Or at least a certain part of his anatomy wasn’t.

“I know you won’t be able to think about breathing in a crisis situation. But right now, let’s focus on good technique.” His voice was smooth as honey in her ear. “Take a deep breath and hold it.”

She inhaled, letting the air fill her lungs—and expand her breasts quite nicely. From where he stood looking over her shoulder, Blake would have had to be oblivious to miss the view down her blouse as she put on her best heaving-bosom routine.

He tightened his arms around her, pulling her back against him. Oh, yeah. That was definitely his cock back there. He was getting harder by the second.

“Now, just squeeze your finger gently on the trigger,” he commanded. “It should surprise you when it goes off.”

She slowly pulled the trigger. The hammer fell with a distinct click.

“That was perfect. You didn’t flinch at all,” he said. “Let’s try it now with the clip loaded.”

Trista almost groaned in disappointment when he moved away from her to load the magazine of her 9mm. She leaned her hip against the counter and watched as he worked. Damn, he had some nice hands. She could just imagine what they’d feel like roaming over her naked body. When he was done, he held out a set of hearing protection— the kind that cut out almost all the sound.

She frowned as she took the earmuffs. “I won’t be able to hear your instructions with these on. Shouldn’t we use the foamy things.”

His mouth quirked. “The foam earplugs, you mean? No. The earmuffs muffle the sound better. Don’t worry. I’ll be right behind you, guiding you by touch. All you have to do is focus on the target.”

After he was once again standing behind her, Blake leaned close to her ear for one last set of instructions before she put the muffs in place. “You have a full magazine, but I want you to take your time and try to make every shot perfect.”

She picked up her Lady Smith 9mm and sighted in on the target. Having all that rock-hard muscle pressed up against her was even more distracting than it’d been before, and her hands began to shake. Blake immediately wrapped his arms around her, his hands supporting her wrists—which only made her tremble more. The way the inside of his arms pressed against the sides of her breasts was doing all sorts of delicious things to her body.

Trista relaxed back, subtly rubbing her ass against his erection. Blake didn’t pull away. If anything, he tugged her a little closer. He was trying to seduce her.

She forced herself to focus enough to actually aim in the general direction of the target and squeezed out a shot. She didn’t give a damn where the bullet hit, but she did use the recoil as an excuse to bump her ass back into Blake’s hard-on. She took a breath and held it, then pulled the trigger again. When she leaned back against him this time, she gently rotated her ass in blatant invitation. Blake must have approved because he slid his hands down her bare arms until his fingertips brushed the sides of her breasts.

The contact was teasing, questioning, as if he wanted to make sure this was what she wanted.

Man, this was so what she wanted.

Keeping her pistol pointed in a safe direction, she turned her head until their eyes met. The heat in his made her pulse skyrocket. She wanted to say something flirty and suggestive, but she’d have to shout to be heard over the ear protection they wore, and that wouldn’t be very sexy at all. So instead, gaze still locked with his, she slowly and deliberately grazed his scuff-roughened jaw line with her lips. That must have been good enough for Blake. When she turned back to send another 9mm downrange, he slid his hands under her breasts to cup them through her shirt. Needless to say, that round went wide of the target. Hell, she wasn’t sure she even hit the wall behind it. She didn’t care. She was just happy he’d finally gotten the message she’d been sending his way.

She took a deep breath, letting her breasts fill Blake’s big hands. She thought she might have moaned, but she couldn’t tell over her earmuffs. She doubted her shooting instructor had, either. That was okay. She’d make sure he knew exactly how much she enjoyed what he was doing later.

Behind her, Blake bent to nuzzle her neck. His mouth was warm on her skin, and she tipped her head to the side to give him plenty of room. Steadying the weapon, she squeezed off a lazy shot at the target and hit it dead center. Hmm, nothing like getting her breasts fondled to improve her focus.

She loved a man who knew how to use his mouth, and Blake certainly fell into that category. His lips on her neck were doing crazy things to her body, and she shivered as goose bumps chased over her skin. And when he traced his tongue along the pulse line of her jugular all the way from her collar bone up to her ear? Well, she just about melted. She was on the verge of dropping her Smith and Wesson when a sharp nip of teeth brought her back to reality. She tried to get herself under control, but she couldn’t.

She was already drunk from the first little touch.

She let her head fall back, silently begging him for more. And more was exactly what he gave her. Oh God, could a woman have a neckgasm? If his mouth felt that good there, what was it going to feel like on her nipples? Or her pussy? She trembled at the thought.

She was so caught up in what Blake was doing above the collar of her shirt she almost didn’t realize he’d started unbuttoning it until she felt cool air on her skin. Her heart beat faster. He stopped halfway from the bottom to motion toward the target with his chin.

Trista blinked. He wanted her to keep shooting? Was he nuts? She was so blurry-eyed from excitement she was starting to worry about their safety. But he was insistent, nudging her again.

She lifted her 9mm and took a deep breath, doing her best to lock her eyes on the man-shaped silhouette hanging from the cable. The task was made more difficult by the fact that Blake had finished with the buttons on her shirt and had wrapped his hands around her satin-covered breasts. She hadn’t thought her shirt had been that thick, but the increase in sensation let her know that was a lie. Her nipples tightened almost painfully against her bra.

Blake gave her a sharp nip on the neck to put her back on task. She lifted her head, took another breath and held it, then squeezed off a shot at the head of the target.

Hmm, another hit. She’d better be careful, or Blake might catch on to her game.

Buy it at All Romance eBooks!
https://www.allromanceebooks.com/product-handsontrainingthebadgebunniesseries-910402-144.html

TWO COP, A GIRL AND A PAIR OF HANDCUFFS
https://www.paigetylertheauthor.com/BooksTwoCopsAGirlAndAPairOfHandcuffs.html

A COP, HIS WIFE AND HER BEST FRIEND
https://www.paigetylertheauthor.com/BooksACopHisWifeAndHerBestFriend.html 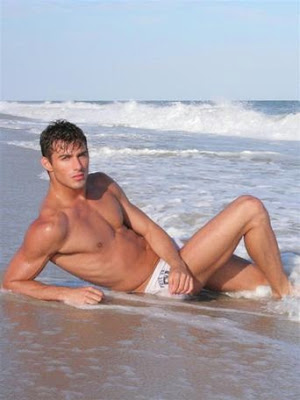