Lori Foster Get Together!

The Lori Foster Get Together is one of the best conferences around, and this year’s was no exception! 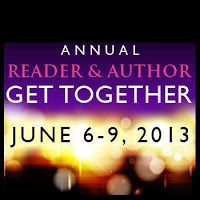 Even though it didn’t officially start until Thursday, hubby and I got there on Wednesday. After checking in, we headed over to our favorite restaurant PF Changs where we talked books, then went back to the hotel and hung out.  We got to sleep in the next morning, which was bliss, then did some writing before going over to IKEA, where we promptly lost ourselves in the wonders of home decor and furnishings for a couple hours.  If we didn’t have dinner reservations that night, we might still be there! Yeah, we love that place!

That night it was back to PF Changs (told you it was our favorite restaurant!) for dinner with Monette Michaels, whom we met the first time we went to Lori’s and have been good friends with ever since.  Dinner with her at Changs has become a tradition.  After that, it was back to the hotel to regsiter and get our badges, then hang out at the meet and greet.  It was the first time Lori had something on Thursday like that, and hope she does it again because it was so much fun!  Hubby and I hung out with the fangirls from my Street Team – Brenda Wheeler, Janet Juengling-Snell, Cindy Overton, Kimberly Radicy-Rocha and Barb Ledbetter – as well as fellow Romance Divas Maddy Barone, Mary Quast and Robyn Bachar, and their friends Jessica P. and Diana B., along with Kathryn M. Oh, and there was a DJ for dancing.  Yay!

Surprisingly, we didn’t stay up too late that night.  Mostly because we had to be up early the next day to help stuff goody bags. You get to meet lots of new people while doing it, so it’s always fun!  It took most of the day, though, so we didn’t get to hang out much until dinner.  Then it was time for the book signing.  It’s one of the highlights of the conference because I get to meet so many people. Even recruited some new members for my Street Team! Love it!  Afterward, we met up with Desiree Holt and her daughter in the bar, which rocked!

We slept in again on Saturday, then spent the day hanging out with everyone until crazy late that night!  Man, were we tired the next day!  But spending time with Brenda and her hubby and Maddy and Jessica, then Janet and Cindy after that was worth it!

Can’t wait until next time!

I have pictures on my FB page, so hope you’ll stop by!
https://www.facebook.com/paige.tyler.9

I think it was the best one yet and looking forward to next years. I got in late on Thurs and I like your idea of getting in on Wed. Getting caught up in the workshops and doing an author event didn't give me much time to socialize like I wanted. So you were the one hogging Maddy! LOL I'll owe her two chocolate martinis cuz I couldn't find her on Sat. I'm trying to talk hubby to coming as well. So glad I was able to see you. HUGS

It was my first RAGT, but it certainly won't be my last! Thanks for taking me on as a new Street Team recruit!!! Loved meeting you!

Mary – LOL! Yeah, we were hogging her! She's so much fun! nd you should totally get your hubby to come with you! It was so great seeing you!

Tracey – So glad you came over to meet me during the book signing! I love hanging out with readers! And so glad you joined the team!

It was awesome finally getting to meet Paige, seemed like I already knew her for years from online… Loved hanging out with her & her hubby, along with so many other great ppl we got to meet. My hubby even loved it, even though this is not his scene… What a man will do for love, and I for him! <3
This was our first year but not our last, look forward to seeing all you next year! 🙂

Brenda – So excited to meet you, too! I felt like I knew you before we met because we talk on FB all the time! LOL! You rock! And yes, hubbies that do things with us and for us are the best! Can't wait until next time!

This was our 2nd RAGT and it was more fun than last year. It was great meeting you and all the other authors. Pictionary on Sat. night in the Ballroonm was hysterical. 🙂 Can't wait until next year!

Rebecca – So great meeting you, too! Can't wait, either!