Kayla and the Rancher! 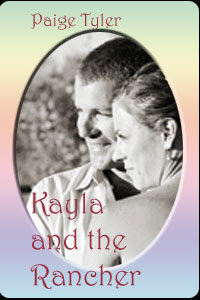 Here’s a never before released excerpt of Kayla and the Rancher, a bestseller over on Romantic Spankings!

Deciding that the tack had been cleaned enough, Cord replaced it on its hook and, grabbing his hat, headed for the house. In the setting sun, he could see the glow of a light coming from Abigail’s room, and he felt compelled by the urge to see her. Perhaps he’d ask her to go riding with him tomorrow, he thought as he made his way through the kitchen and up the stairs.The door to her room was ajar, and without thinking, Cord pushed it open and walked right in only to find Abigail soaking in the tub. She had her head back and her eyes closed, and at his entrance, she sat up in surprise. The movement caused the bubbles to shift, displaying smooth shoulders and creamy breasts, and for a moment, Cord simply stood and stared, transfixed by the sight of his naked fiancé’s glistening wet skin. It wasn’t until a startled Abigail crossed her arms over herself that Cord abruptly remembered he was supposed to be a gentleman.Flushing beneath his tan, he turned his back to her. “I’m sorry. The door was open, and I…I didn’t realize you were taking a bath.” His color deepened as he realized he was stammering like a schoolboy. Behind him, he heard the water swish against the side of the tub as she sank deeper into it. “What was it that you wanted?” she asked softly.He stared at the wall, trying to concentrate on something other than the fact that there was a very beautiful naked woman in a bathtub full of bubbles right behind him. He cleared his throat. “I thought that perhaps you’d like to go riding with me tomorrow,” he said. “If you’re not going into town, that is.”She didn’t answer immediately, and though Cord wanted to turn and look at her, he determinedly held his position while he waited for her reply.“I’d like that,” she said after a moment, and Cord felt himself relax.“Good,” he said. “I suppose I should let you get back to your bath, then.” With a nod, he left the room, careful to keep his back to her. In the hallway, he stood outside the door for a moment, listening to the sounds of the water as she washed, and as he imagined her running a soapy sponge down her neck and over her sweetly rounded breasts, he almost groaned aloud. As far as he was concerned, that wedding dress she was making couldn’t get done fast enough.Though she couldn’t imagine what she’d done, Kayla was sure that Cord had come into her room to spank her again. However, after he’d just come in to ask her to go riding with him, she realized that it had just been wishful thinking on her part.But what if it had been more than that, she thought? What if Cord really had come into her room to spank her? Exhilarated by the idea, she picked up the sponge and gently ran it down her outstretched arm, letting the scene play out in her mind.Of course, Cord would question her about her misdeeds first, asking her why she’d deliberately disobeyed him and gone back to the saloon to play poker when he’d specifically told her not to. She’d give him some flippant answer that would be sure to annoy him, and go back to her bath. His jaw would clench and he’d remind her of the consequences for her actions. Then, before she even knew what he was doing, Cord would grab her arm, haul her out of the tub and drag her – naked and dripping wet – over to the straight-back chair.Knowing she was about to get a spanking, she’d protest, of course, but just a little. After all, wasn’t this what she wanted?But Cord would ignore her objections, and a quick yank would send her tumbling over his strong thighs. With his arm firmly around her small waist, she would be helpless to do more than lay there and wait in breathless anticipation for that very first spank.Naturally, Cord would scold her, but gently, of course, and all the while he would caress her bare bottom. Then, finally, when she thought she couldn’t wait any longer, Cord would lift his hand and bring it down sharply on her right cheek. Just as quickly, he’d smack the other, alternating from side to side until he had a nice rhythm going.Leaning back in the tub, Kayla could almost imagine the imprint his hand would leave on her creamy skin, and because she colored easily, her bottom would have a rosy glow to it after a dozen or so spanks. And she imagined that because her skin was wet, it would sting even more. But Cord wouldn’t stop there, no matter how much she squirmed and kicked. Instead, he would tighten his hold and tell her that he had simply warmed her up for a real spanking! No sooner would she be able to ask what he meant by that than she’d feel the sharp slap of her wooden hairbrush on her bare cheeks.Kayla shifted in the water, her bottom suddenly stinging simply at the thought of getting spanked with the hairbrush again. That wasn’t the only part of her responding to such a vivid fantasy, either. On the contrary, there was a warm tingle between her thighs that didn’t want to be ignored, and she had to fight the urge to reach down and touch herself there.Blushing, she sank lower in the tub and imagined what it would feel like for Cord to touch her there. Before she’d met Cord, she’d never had such thoughts about a man. Now, it was all she seemed to think about. She wondered if it was Cord, or if there was something in the air out here that made her think such naughty thoughts. She decided that she had no idea, but she liked it nonetheless.

If you’d like to find out more about Kayla and the Rancher, as well as read another excerpt, click here!

And don’t forget to check back next Wednesday for my vision of the sexy rancher, Cord Holderness!

Such a hot excerpt! 🙂

Oooh! Another spanking good excerpt to wet my appetite! heh!

Great excerpt. I think the western genre so absolutely perfectly fits the spanking fantasy. i.e. John Wayne and such.

Anyway, take care and you are certainly welcome to stop by and say hi anytime at The Cherry Red Report.

Dave – Thanks! I have to admit that I’m not a huge John Wayne fan (I’m more of a Viggo Mortensen girl! *grin*), but I agree about the westerns being the perfect genre for a spanking story!