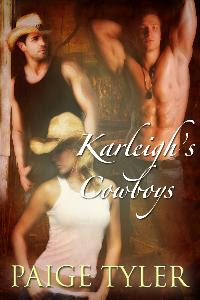 Before I tease you with an excerpt, I have a confesstion to make. I never used to read westerns. I never cared much for western movies either – well, except for Clint Eastwood movies, and Viggo Mortensen’s – so I figured I wouldn’t like western romances, either. I was wrong. I read Shelley Thacker’s Into the Sunset – one of my all-time favorite books, by the way – and I was hooked!

That was around the time when I sold my very first book. After finishing that one, I immediately started on another, and that one was – you guessed it – a western romance. And not just any western romance, but a western spanking romance to boot.

It’s called KAYLA AND THE RANCHER and it’s about a big-city Eastern girl from the mid 1800′s who decides to defy her father (who intends to marry her off to a jerk) and go to San Francisco to pursue her dream of becoming a dress designer. On the stagecoach, Kayla meets a shy girl heading to the Wyoming Territory to be a rancher’s mail-order bride. Before they reach Copper Creek, the girl changes her mind and begs Kayla to tell her groom to be. Kayla has every intention of doing so, but when she sees how gorgeous the rancher is, she finds herself pretending to be his mail-order bride instead. As you can imagine, that gets her into all sorts of trouble!

That book was (and still is!) so popular that you’d think I would have devoted myself solely to writing westerns, but I didn’t. Not until a few years later when I came up with THE CUTLER BROTHERS SERIES. It’s about two hot and hunky Texas brothers named Cade and Madoc who are U.S. Marshals. One falls for a girl in the Witness Protection Program, while the other falls for a beautiful fugitive wanted for murder. Like my first western, it was immediately a bestseller for me (and still is!).

So, did I run right out and write another western on the heels of that three-book series? Nope. I haven’t written another western until now. I enjoyed it so much that I’m working on another. It’s set in the old west and it’s about a gunslinger and a feisty girl in need of a good spanking. Oh, and I’m also working on an outline for another book in THE CUTLER BROTHERS SERIES, which I’m really excited about! The book’s fans have been demanding a new book in the series, so you have to give them want they want! LOL!

Now, how ’bout a sexy excerpt from KARLEIGH’S COWBOYS?!

Beauty must have sensed Karleigh the moment she walked into the barn because the mare whinnied in greeting at her. Lips curving into a smile, Karleigh took a sugar cube from the basket and held it out to the horse. The mare gently took the treat from Karleigh’s outstretched palm, then nuzzled her hand affectionately. Karleigh ran her hand over the mare’s silky chestnut coat with sigh. On the other side of the barn, Loverboy and Highwayman stuck their heads out of their stalls to look longingly at the female horse. Compared to Beauty’s love life, hers didn’t seem nearly as complicated, Karleigh thought. If she was careful and did some strategic planning, she could keep seeing both Holden and Mav without either of them finding out. How hard could it be?

The sound of the door opening interrupted her before she could answer that question. Startled, she turned to see Holden and Mav walking into the barn. Her stomach did a crazy little backflip at the sight of them. It should be illegal to be in a room with two guys this gorgeous.

Mav gave her a grin. “Where were you hiding all day?”

Had it been that obvious? Karleigh ran her hands down the front of her short, silk robe. She wished she’d worn something a little less revealing, but she hadn’t expected anyone to be on the ranch. Not that it would have mattered. Both men were undressing her with their eyes anyway. Heat pooled between her thighs, and she stifled a moan.

“I went shopping with Heather in Colorado Springs,” she said.

Holden hooked his thumbs in his belt, his fingers resting lightly on the big buckle. Karleigh heard somewhere that when a man did that, it meant he was thinking about sex.

“Mav said you two went for a ride and a picnic yesterday.”

Oh crap. She reached up to nervously tuck her long, blonde hair behind her ear. “Um, yeah.”

Karleigh stared at Mav in shock, unable to believe he’d told Holden they’d slept together. But why wouldn’t he? Mav had no idea she’d wanted to keep it a secret.

She tensed, bracing herself for the anger she was sure was headed her way, but to her surprise—and relief—neither man looked angry. In fact, they were grinning.

She looked from one to the other. “You’re not mad?

“Why would we be mad?” Holden asked.

She thought it would have been obvious. “Because I slept with both of you.”

His dark eyes took on that smolder she was coming to recognize. “As long as we do it at the same time. Or more precisely, do you at the same time.” He slanted Holden a glance. “Isn’t that right?”

Mav nodded. “Unless you’re not comfortable with that.”

She looked at them from beneath lowered lashes, her heart beating a little faster. “I didn’t say that.”

“So, what are you saying?” Holden asked.

“Just that I’ve never actually had sex with two men before,” she said. “But I’m all about trying new things. Especially when they sound like they’re going to be so much fun.”

Mav’s dark eyes flared. “Is that a yes?”

She gave them a sultry smile. “It’s most definitely a yes.”

He grinned. “We were hoping you’d say that.”

Karleigh wasn’t sure what the rules were when it came to having a threesome—or even if there were any. Fortunately, Holden and Mav seemed to know exactly what to do because they immediately walked over to her. She waited expectantly to see which of them would take the lead when Holden pulled her into his arms and kissed her. She looped her arms around his neck, her lips parting as his tongue took possession of hers. His erection bulged in his jeans and rubbed against her tummy, telling her how turned on he already was.

His hands went to the belt on her robe, giving it a tug. As it fell open, Mav stepped up behind her, slipping off the garment and leaving her naked. Being sandwiched between two rock-hard male bodies made her pussy purr, and she moaned against Holden’s mouth. He slid his hands in her hair, gently tilting her head back while Mav pressed his mouth to the curve of her neck. Two sets of hands roamed over her body, caressing her everywhere. She tried to focus on who was touching where, but she lost track. After a while, it felt like she had a dozen hands touching her body, not just four. And it felt damn good.

When hands finally buried themselves in her hair again, she decided that must be Holden. Which meant Mav was cupping her breasts. As he rolled her hard nipples between his fingers, his cock pressed against her ass, straining at the material of his jeans. The reminder of how delicious he’d felt inside her asshole made her moan, and she rotated her hips in invitation, silently letting him know she wouldn’t mind him doing it again.

Holden made enough room so Mav could slide his hand down her stomach to find her clit in the downy curls between her thighs. While he began making circles around the sensitive nub, Holden took over massaging her breasts. He rubbed the pad of his thumb over her nipples before giving each of them a firm squeeze. Being touched in both places at once made the sensations that much more intense, and she let out an audible sigh as Holden pulled his mouth away to trail kisses down her neck.

Behind her, Mav brushed her ear with his lips. “Does this feel good?”

His breath was warm and moist against her skin, and she shivered. “Mm-hmm.”

The way they were touching her was making it difficult to think, much less speak. “Us?”

Taking one hand from her breast, he slowly glided it down her stomach to join Mav’s between her legs. Ah, so that was what he’d meant.