You can imagine my surprise, and I have to admit, chagrin when I realized that not only had we both come up with the same idea, but that the books came out almost at the same time! Yikes! I was relieved to see that the stories were totally different, at least! LOL!

I considered emailing Bronwyn and making a joke of how we’d both come out with our versions of Goldie and Three Bears and named it the same thing, but wasn’t sure if I should. Turns out, Bronwyn was thinking the same thing, only she followed through and actually emailed me!

We had a good laugh about it, then came up with the idea of running a contest to win copies both books! To enter, all you have to do is read Bronwyn’s excerpt and post your answer to my question about it in the comments and include your email, then visit her blog to read my excerpt and do the same! But you must comment on both blogs to enter! 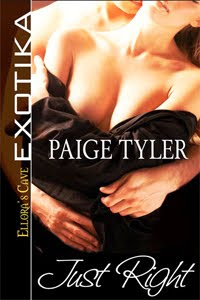 The sexy tale of Goldie and the three werebears

When Goldie Lockwood gets lost hiking and comes upon an isolated cabin, little does she know it belongs to three hot and hunky werebear brothers. The guys aren’t thrilled to discover Goldie ate their food and slept in their beds. Not wanting to go to jail, she suggests the men punish her for her naughty misdeeds—with an arousing round of spanking.

Goldie loves getting spanked and decides that after having her bottom warmed, she needs a little sex to make the night complete. The only question is whether she’s going to sleep with one of the brothers—or all of them. 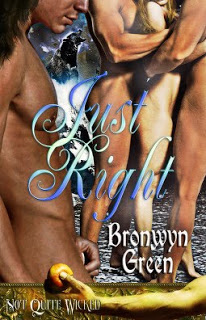 A Not Quite Wicked Tale

When Department of Natural Resources officer, Gwendolyn Locke, hits a black bear on the way home from work one night, her entire view of reality changes. She discovers that shape-shifters exist, and she’s just become Goldilocks to three gorgeous, very aroused men who also happen to be werebears. Being snowbound has never been so hot.

1. What gave you the idea to do a retelling of Goldie and the Three Bears?

Then I realized the fellow RP author Tia Fanning had already done
something similar – Orianna and the Three Werebears, so I was going to ditch the Goldilocks idea and go with something else. But Tia was adamant that I write my own version, reminding me that no matter what I came up with, it would still be different from hers. So, I took the plunge and did it.

2. How did you get into writing? Did you always want to be a writer?

I’ve pretty much always loved writing, and I started the usual way, writing godawful, angsty poetry in middle school and high school. In college, I evolved to the short story and stayed there for quite sometime. I ran into Brynn a few years after I graduated college and really started toying with the idea of writing a novel, but then life happened and I had kids and writing became one of those things that I’d “get around to someday.”

Then we had a sudden, very tragic death in our family and I realized that sometimes someday doesn’t come. I knew then that if I was going to follow my dream and by extension, teach my children to follow theirs, I needed to actually do it instead of just thinking about what I’d do if I had the time. I started writing in earnest then, and I haven’t stopped.

3. Can you tell us what you’re currently working on?

It’s a grab-bag – lol! Right now, I’m working on the third book in my Celtic Fire series for Total-e-bound, a werebear menage for Resplendence and another Handcuffs and Lace story, also for Resplendence.

Oh yeah. I love fairy tales. I have a huge collection of them – they were my first love as a kid. I’d love to do The Wild Swans, Twelve Dancing Princesses and The Goose Girl…that would be a good start, anyway.

To enter to win, answer this question in the comments and remember to include your email, then visit Bronwyn’s blog to read my excerpt and comment http://bronwyngreenblog.blogspot.com

Question:Who interrupts Gwendolyn and Noah’s kiss? Post the answer in the comments along with your email address! We’ll announce the winner on Monday!

Great minds! I once wrote a book and the title and main character were both identical to another author's that I found by chance. I changed mind because I was still in the early writing stage, but it kinda made me feel a little weird. lol! Great interview!

You know what they say about great minds:)

Loved your excerpt Paige, and will add it to my TBB list.

What a fun contest, and two great excerpts!

The answer is Lucas 😉

Have a great day everyone!

Thanks for the chance to win your story, Paige.

that would be Lucas who interrupted

What a hot excerpt! Thanks!

And Lucas interrupted the lip-lock… spoilsport! 😉

The kiss (and what a kiss!) is interrupted by Noah's brother Lucas.

Oh, what a hot excerpt!

The answer is Lucas.