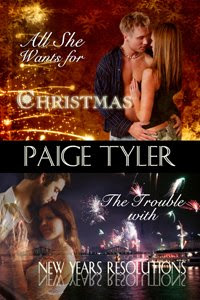 I have two new sexy holiday romances out and the best part is that they’re available in one book! You can get your copy in either eBook or Print!
All She Wants for Christmas

For weeks, Hayley Knowles has been fantasizing about getting spanked by her husband, Conner. When she lets her secret desire slip at a Christmas party with her closest friends, she is stunned to discover that not only have the other girls all gotten spanked before, but love it.

Hayley gets the surprise of a lifetime as each of her friends tells the story about the first time they got spanked. Each tale is sexier than the one before, and after hearing them, Hayley, wants to be spanked even more. But how can she possibly ever get her husband to do it, especially since she’s too shy to tell him?

This is the holiday season, though, so maybe Hayley might get exactly what she wants for Christmas!

“Monica and I were just talking about that the other day,” Lyndsay said. “And we’ve decided that we’d really like to just drop the kids at our parents’ so that our husbands can pamper us for an entire day. Breakfast in bed, followed by a bubble bath for two, then a nice, long full-body massage, and a romantic candlelit dinner.”

Genevieve rolled her eyes. “Sounds boring to me.”

“That’s just because Lyndsay forgot to mention the part about the mind-blowing sex,” Monica said. “We’d get to that part at some point!”

The redhead shook her head. “If you’re going to ask for the perfect Christmas present, then you need to think big. I’d want Chase to whisk me off to a private island somewhere, rub my naked body down with oil, and then make love to me for hours on end out on the beach while the waves roll over us.”

When Hayley and the other girls laughed, Genevieve gave them a disbelieving look.

“Come on,” she said. “I can’t be the only one who has kinky Christmas wishes!”

Hayley felt herself blush at that and hastily sipped her eggnog so that her friends wouldn’t see how red her face was. She wouldn’t exactly call making love on the beach kinky, at least not compared to the fantasies she’d been having lately. Just thinking about them made her pulse quicken.

“Well,” Jill said, giving them a mischievous smile. “I’ve been thinking about how much fun it would be if Philip tied me up and had his way with me!”

Hayley almost choked on her eggnog at the words. She wasn’t the only one staring at the blond-haired girl in disbelief, either. Lyndsay, Monica, and Genevieve all looked just as surprised by the other girl’s admission.

“You have to be kidding,” Monica said.

Jill shrugged. “What can I say? There’s just something that turns me on at the thought of being bound and helpless and totally at my lover’s mercy.”

Hayley could only gaze at the other girl in wonder. Well, this was definitely a side of her normally reserved friend that she’d never seen before.

“So,” Genevieve said, sipping her wine. “What about you, Hayley? What’s your kinky Christmas fantasy?”

Hayley shifted on the couch, suddenly extremely aware of her friends looking at her. “Um…” she stammered. “I don’t really have any.”

“I find that hard to believe,” Genevieve scoffed.

“Me, too,” Monica said. “Come on, Haley. We all told what we want for Christmas. How about you?”

Beside the other girl, Lyndsay was grinning. “You know we’re going to wear you down you until you tell us.”

Hayley couldn’t help but laugh. She normally wouldn’t have succumbed to their friendly pressure, but the rum in the eggnog had her feeling much less inhibited than usual.

“Okay, but you have to promise that you won’t think I’m weird,” she said, and then hurried on before she lost her nerve. “I’d like Conn to spank me. I mean, I’ve never been spanked before, so I’m not really sure if I’d even like it, but every time I think about him putting me over his knee, I get so excited.”

Hayley held her breath as she waited for her friends to say something, but they were all staring at her in astonishment. She felt her face go red.

Jill shook her head. “We don’t think you’re weird at all,” she said. “At least I don’t. I’m just surprised. Not by the fact that you get turned on by the thought of Conner spanking you, I mean, but that you’ve never been spanked before.”

“Me, too,” Lyndsay and Monica said in unison.

Genevieve nodded over the rim of her wine glass.

Hayley looked at them incredulously. “Wait a minute. All of you have gotten spanked by a guy before?”

The other girls all nodded.

Hayley shook her head. “Never,” she said, and then frowned. “So, I guess that means I really am weird since it seems that I’m the only one who’s never had my bottom reddened.”

Her lips forming into a pout, she grabbed a snowman-shaped sugar cookie from the plate on the coffee table and took a bite as she curled her feet under her. How could she be the only one missing out?

Hayley had first discovered her secret desire to be spanked several months ago. She had been flipping through a fashion magazine at the hair salon when an article had caught her eye. It had been a story about fulfilling your wildest bedroom fantasies, and though she had skimmed through most of it, she had stopped when she’d come to the part about spanking. Many modern women, it said, found being put over their lover’s knee for a spanking incredibly arousing. Admittedly, Hayley had been shocked at the idea at first, but the more she’d thought about it, the more intrigued she had become by the notion of getting spanked.

In fact, she had been so wrapped up in the fantasy of Conner spanking her that she barely remembered talking to the stylist while the girl had done her hair. Since then, the thought had refused to go away, and she found herself daydreaming about the subject all the time. But she could never see herself asking her husband to spank her; it would be too embarrassing.

“So, why didn’t any of you ever tell me that you were into spanking?” she asked after a moment.

Jill shrugged. “I guess we all assumed that you had done it, too.”

Hayley’s brow furrowed. “Well, I haven’t. And now that I know you girls have all done it, I’m jealous,” she said. “So, tell me what it’s like.”

Her friends all looked at each other as much as if to say “Who wants to go first?”

Sticking to her list of New Year’s resolutions had always been easier said than done for Tatum Webber. So, when her husband, Jarrett, suggests that he give her a spanking every time she slips up, she readily agrees. It might be just the incentive she needs. Besides, she’s sure he wouldn’t really spank her.

But it turns out that Jarrett is completely serious about spanking her. And when Tatum’s best friend keeps ratting her out every time she slips up, she finds herself getting spanked on a regular basis.

The only thing that’s more surprising than Jarrett’s spankings is how much Tatum enjoys them!

Taking in Tatum’s petite, slender figure in the simple top and long, flowing skirt she was wearing, he pointedly checked his watch. “I was at the gym,” he said, folding his arms across his chest. “Where were you?”

Relieved that her husband didn’t sound angry, Tatum set her purse and gym bag down on the low bench along the wall before answering. “I’m sorry,” she said. “I know I was supposed to meet you there at six-thirty, but I got held up.”

Jarrett nodded, his blue eyes regarding her with interest. “At work?”

She busied herself with the mail that was sitting on the counter so she wouldn’t have to look at him. “Kind of,” she said noncommittally.

“Uh-huh,” he said. “And then you decided to stop by the mall to do some shopping on your way to the gym, I guess.”

Tatum’s head jerked up in surprise. “How did you know I went to the mall?”

“When you didn’t show at the gym, I got concerned,” he told her. “I tried your cell phone, and when I couldn’t reach you, I called your office. They told me that you’d already left, so I called Jennifer to see if she knew where you were, and she said that you went shopping with her. Which means that you broke one of your New Year’s resolutions, didn’t you?”

She folded her arms. “No, I didn’t,” she told him, lifting her chin. “I went to the mall, but I didn’t buy anything, so technically, I didn’t break the resolution I made.”

He considered that for a moment. “But you did still blow off going to the gym to exercise,” he pointed out.

Tatum gave him a superior look. “Actually, I did go to the gym.”

Jarrett lifted a brow. “And you exercised for the full thirty minutes?”

Her brow furrowed. “Wh-what?” she stammered.

He gestured to the list of resolutions that she’d hung up on the refrigerator with a magnet. “You said that you were going to exercise at least thirty minutes a day, three times a week,” he reminded her.

She chewed on her lower lip. “I…um…didn’t check my watch,” she mumbled.

“Which is your way of saying that you didn’t exercise for the full thirty minutes,” Jarrett concluded.

Tatum sighed in exasperation. “Okay,” she admitted. “I did ten minutes on the treadmill, and then I came home. I’ll make up for it next time.”

Jarrett shrugged. “Regardless of the fact that you blew me off, you still broke your resolution,” he said. “Which means that I’m going to have to give you a spanking.”

“A spanking,” he repeated. “We did agree that was what I would do if you slipped up and broke your resolutions, didn’t we?”

“Well, yeah,” she said. “But that was because I didn’t think you were really going to do it.”

His mouth quirked. “Unlike you, babe, when I say I’m going to do something, I actually follow through on it.”

Tatum stared at her husband in disbelief. Jarrett couldn’t really intend to spank her, could he? But he had taken her hand and was already leading her over to the kitchen table.

“Honey…” she began, trying to hang back.

He turned to face her. “You did say that you wanted me to help you keep your New Year’s resolutions, didn’t you?”

“Tatum, if you expect to stick to your resolutions, then you have to be held accountable for those times that you don’t. It will never work if you aren’t,” Jarrett told her sternly. “Tonight, you chose not only to go to the mall instead of meeting me at the gym like you were supposed to, but you didn’t exercise for the full thirty minutes once you did get there. I’d say that you’ve earned yourself this spanking.”

Tatum chewed on her lower lip. Was he right? Was the reason she’d never been able to stick to her New Year’s resolutions because she’d never been held accountable for doing so? Maybe so, she thought. Perhaps a few smacks on the bottom were just what she needed. Besides, she was sure her husband wouldn’t spank her that hard.

“Okay, you’re right,” she said, giving him a sheepish look.

Jarrett lifted a brow, probably at how easily she’d given in, she thought, but he made no comment. Instead, he just pulled out one of the straight-backed chairs from the table and sat down.

Tatum went over his knee meekly, though her cheeks colored when she thought of the picture she must be making with her head hanging down and her bottom up in the air.