I’ve Got a New Book Out and It’s Just $0.99 on Amazon Kindle and B&N Nook, and at ARE! – Paige Tyler – New York Times and USA Today Bestselling Author 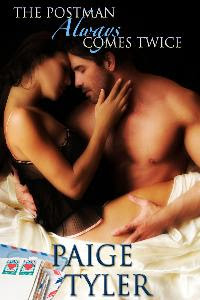 I’m so excited! I’ve got a new book out and it’s just $0.99 on Amazon Kindle and B&N Nook, and at ARE! It’s called THE POSTMAN ALWAYS COMES TWICE and it’s fun, sexy and smokin’ hot!

I actually came up with idea while my hubby and I were out walking our dog. We were talking about my book GOOD COP, BAD GIRL and how popular books about cops are when the UPS man drove by. I said I wondered if women get hot for all men in uniform, like a UPS driver. My hubby said, or even a postman. I laughed and said, sure, the postman always comes twice. We looked at each other and both said, that’d be a great name for a book! So there you have it!

This postman is carrying one hell of a package!

Charisma Harlow has been lusting after her hunky postman Travis Walker ever since he started delivering her mail a few months ago. In fact, she’s so hot for him, she finds herself ordering things online so he’ll show up more often. When her subtle flirting doesn’t do the trick, she decides to finally get serious and seduce him outright. She orders the heaviest thing she can find so he’ll have to bring it inside her apartment, then greets him at the door in nothing but a short, sexy robe when he shows up.

Travis gets the message and spends his lunch hour proving he really knows how to deliver—in the bedroom.

There, standing on her doorstep, was six-foot-four inches of gorgeous stud. She would never have imagined the button-up shirt and blue trousers that made up the postal service uniform could be so damn sexy on anyone, but on Travis, it looked
hot as hell. She supposed it could have something to do with those impossibly broad shoulders and muscular biceps. Damn, he was built.

She could tell from the way he took in her robe he was surprised she wasn’t wearing her usual tank top and pajama bottoms. His golden eyes caressed the curve of her breasts for a moment before lingering on her long legs, and Charisma felt heat pool between her thighs at the flicker of lust she saw there. To her dismay, he immediately hid it behind a façade of professionalism.

“It looks as if I have another delivery for you,” he said, holding out the electronic clipboard. “What did you buy this time?”

“A spinning bike.” She glanced at him form under her lashes as she signed her name in the signature block. “It looks really heavy. Do you think you could bring it inside for me?”

He flashed her his usual heart-stopping grin. “No problem.”

As he bent to pick up the big box, Charisma stepped back so her could come into the
apartment.

Anywhere you want to give it to me. She blushed at the naughty thought as she closed the door. “If you could put it in my home office, that would be great. It’s down the hall on the right.”

Even though the box was obviously heavy, Travis had no problem carrying it, Charisma
noticed. She had no problem admiring his great ass as she followed him down the hall, either. She caught her lip between her teeth to stifle a moan.

“Is this okay?” he asked as he set the box down in one of the few open spaces left in the room.

Between her desk, the built-in bookcase, file cabinets and the boxes of stuff she’d bought over the past couple weeks, floor space was definitely at a premium. She’d been so busy with work and ordering things online she hadn’t had a chance to open most of the boxes yet.

He looked around the room, his mouth quirking. “You certainly buy a lot of stuff.”

She felt her face color at the amusement in his deep voice, and she reached up to tuck her long, dark hair behind her ear in an effort to hide her embarrassment. “Yeah, I guess I do. Fortunately for my bank account, I end up sending most of it back.”

Her lips curved into a smile. Score, she thought. She’d purposely left it there in the hopes he would see it. So much for rusty flirting skills.

He gave her a sidelong glance and her pulse fluttered when she saw that the lust she’d noticed earlier was back in his mesmerizing golden brown eyes.

“You aren’t planning on sending this back, are you?” he asked.

“I’m not sure. I haven’t had a chance to try it yet.” She gazed up at him from under her lashes, giving him her best flirtatious look. “Too bad you have mail to deliver. You could have stayed and helped me take it for a test drive.”

Charisma had never been so bold with a guy before, but since her subtle attempts at
flirtation hadn’t worked, she didn’t want there to be any confusion she was coming on to him. Even so, the words made her blush a little. They hadn’t even gone on a date and she was already inviting him into her bed.

Travis’s mouth curved into a sexy grin. “I was actually going to take lunch after I
delivered your package anyway, so I’m off the clock for the next hour. I could hang
around if you think I might be able to help.”

Her heart did a backflip. She had to admit, she hadn’t expected her plan to actually work.

“Are you sure it’s okay? To spend your lunch hour with a woman on your mail route, I
mean?”

He took a step closer, his grin broadening. “It’s perfectly okay. Satisfaction is our number one priority at the Postal Service, you know.”

Buy it at All Romance eBooks in pdf, html, mobi or ePub (Sony eRreader)!
http://www.allromanceebooks.com/product-thepostmanalwayscomestwice-546086-144.html