So excited!  Release day is finally here for HUNGRY LIKE THE WOLF, Book 1 in my Special Wolf Alpha Team (SWAT) Series! 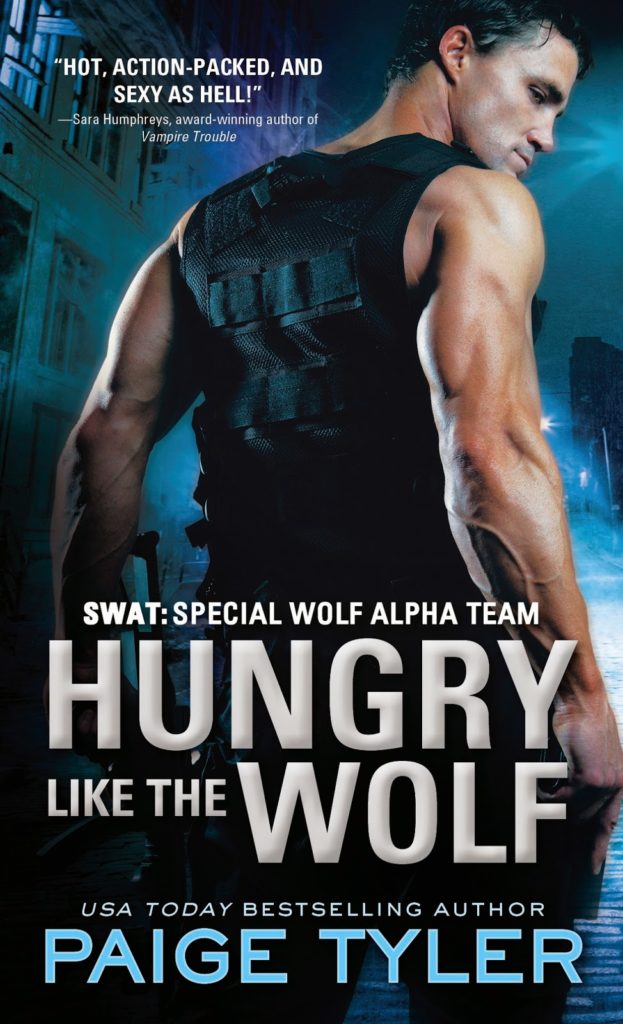 The Dallas SWAT team is hiding one helluva
secret…they’re a pack of wolf shifters.

The team of elite sharpshooters is
ultra-secretive—and also the darlings of Dallas. This doesn’t sit well with
investigative journalist Mackenzie Stone. They must be hiding something…and
she’s determined to find out what.

Keeping Mac at a distance proves impossible for
SWAT team commander Gage Dixon. She’s smart, sexy, and makes him feel alive for
the first time in years. But she’s getting dangerously close to the truth—and
perilously close to his heart…

Excerpt:
Gage leaned forward at the exact moment Mackenzie did. He absently wondered how that could be comfortable with her legs crossed like that, but she was clearly very flexible. He was still pondering the potential benefits of being that flexible when their lips met. There weren’t any fireworks or sparks, or any of that silly stuff young werewolves insisted happened when you kissed The One.
But that didn’t mean kissing her wasn’t amazing.
Gage slipped his tongue into her mouth, teasing hers to come out and play. Mackenzie was more than willing, even moaning a little as their tongues tangled. He slid his hand into her hair, growling as he pulled her closer. She tasted so damn good. Like strawberries on a hot summer day, only sweeter.
Mackenzie pulled away with a husky laugh. “Never had a man growl while he kissed me before. I think I like it.”
Reminding himself to keep his inner wolf in check, Gage tugged her close, trailing kisses from her mouth all the way down her neck and back up again. Mackenzie’s heart was beating out of control, thudding in his ears. Her pheromones filled his nose, evidence of her arousal.
Mackenzie slowly and sensually uncoiled from her cross-legged position and straddled his lap. His hands slid down her back to rest on her hips. He could barely think, much less maintain control. And it only got worse when she started grinding against his hard-on. He swore he could feel the warmth of her pussy through his uniform pants. He couldn’t believe how badly he wanted to let his claws slip out so he could rip off her tank top and shorts and eat her up.
Gage didn’t know how he managed to keep it together. But he had to—he had to protect his pack. He wanted to think Mackenzie was focused more on him than the story she was chasing, but he couldn’t be sure. Until he knew for sure his pack wasn’t in danger of being exposed, he couldn’t afford to let himself be distracted by her searing hot kisses, soft skin, or enticing curves.
That was easier said than done. Resisting her would have been hard as hell if he’d been a normal man, but he was a werewolf, which meant he had to battle the added temptation of her arousal, too. The scent engulfed him, making it hard to remember the reason he couldn’t lose himself in her.
It took everything he had to stop her when she reached down to grab the hem of her tank top. He couldn’t go that far and still stay in control.
Some Reviews!
“Exciting, Action-packed Debut to a Promising New Paranormal Series.  HUNGRY LIKE THE WOLF is yet another demonstration of the immense talent of Paige Tyler.” – Fresh Fiction
“Hungry Like the Wolf promises to be a fun action-adventure following the exploits of a SWAT team for the Dallas PD. This atypical collection of officers will present very colorful personalities sure to keep old and new fans entertained.” – RT Reviews
“Wolfishly sexy and terribly addictive.” – Adria’s Romance Reviews
“A seductive book filled with peril and romance; HUNGRY LIKE THE WOLF was yummilicious!” – Rabid Reads
Amazon
http://www.amazon.com/Hungry-Like-Wolf-Paige-Tyler-ebook/dp/B00MX629CG/ref=tmm_kin_swatch_0?_encoding=UTF8&sr=8-1&qid=1409149682
B&N
http://click.linksynergy.com/fs-bin/click?id=tT8CexMeqzg&subid=&offerid=261457.1&type=10&tmpid=8432&RD_PARM1=http%253A%252F%252Fwww.barnesandnoble.com%252Fw%252Fhungry-like-the-wolf-paige-tyler%252F1120023163%253Fean%253D9781492608479
iTunes
http://itunes.apple.com/us/book/hungry-like-the-wolf/id911527248?mt=11
BAM
http://www.booksamillion.com/p/Hungry-Like-Wolf/Paige-Tyler/9781492608479?id=6025006172806#overview
ARe:
http://www.allromanceebooks.com/product-hungrylikethewolf-1701504-152.html
Kobo
http://store.kobobooks.com/en-US/ebook/hungry-like-the-wolf-7
Sourcebookshttp://www.sourcebooks.com/store/hungry-like-the-wolf.html
Happy Reading!
*hugs*
Previous Post Meet SWAT Commander Sergeant Gage Dixon from Special Wolf Alpha Team! Next Post Meet Officer Conner Malone from Special Wolf Alpha Team!