It’s RELEASE DAY for my SEALs OF CORONADO BOXED SET! 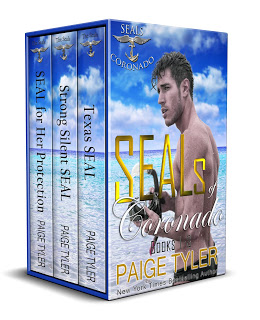 At more than 300 Pages, you get the first THREE BOOKS in the SERIES!

With over 150 FIVE-STAR reviews, find out why readers are saying the books in this series are “full of adventure, romance, and heroes to die for” and will “keep you on the edge of your seat.”

SEAL for Her Protection

He saved her once. Can he save her again?

Investigative journalist Hayley Garner is no damsel in distress. Fiery, feisty and tough, she can handle herself in the field. But when she’s kidnapped by terrorists, she knows she’s in real trouble. Then in sweeps sexy, rugged Navy SEAL Chasen Ward to rescue her from certain death. After getting her to safety, he disappears into the night before she can even thank him.

Weeks later, Hayley encounters Chasen again and finds herself falling into a passionate romance with the hunky hero out of her dreams. But ever since she’s returned home, Hayley feels as if someone’s watching her. Is it post-traumatic stress or does she have reason to be afraid?

He’s a hellbent Navy SEAL, ready to save the girl and take down the enemy.

Desperate and terrified, Felicia Bradford will do anything to get her sister out of a hostage situation. Stealing top secret information from the Navy’s Special Operations Headquarters is her only option. Otherwise, they’re both dead.

Navy SEAL Logan Dunn knows desperation when he sees it. When a beautiful woman shoves a gun in his back and starts making demands, he knows he must act fast. Getting Felicia to understand that he’s one of the good guys just might be harder than he thought. Now it’s up to Logan to get her to trust him before it’s too late. Can this determined Navy SEAL save her sister, take down the enemy, and steal Felicia’s heart all at the same time?

That was then—this is now.

When a woman from his past shows up on his doorstep, Navy SEAL Trent Wagner is taken by surprise. Lyla Torres, his best friend’s kid sister, is all grown up—and more beautiful than he remembered. He’d always had a thing for her back then, but that damn bro code meant she was off limits.

Desperate to find her brother, Lyla needs Trent more than ever. Trent will do anything for the Torres family, including using his SEAL training to track down her brother. Knowing his old friend ran with a shady bunch, Trent’s determined to keep Lyla safe—even if it means risking his life. After all, he never could refuse the request of a beautiful woman, especially one he’s wanted since high school. Can this Navy SEAL protect the woman from his past for a chance at a future together?

Purchase at All Your Favorite Stores!
https://books2read.com/SEALsofCoronadoBoxedSetOne

Previous Post Look what’s on SALE for 99 CENTS! Next Post HER DARK HALF Releases Two Weeks from Today!