It’s Release Day for HER WILD HERO, Book 3 in my Action-Packed X-OPS Series!

It’s finally release day for HER WILD HERO, Book 3 in my action-packed X-OPS Series! It’s available online and in bookstores in ebook and paperback! It’s also the Barnes & Noble Bookseller Pick for May! 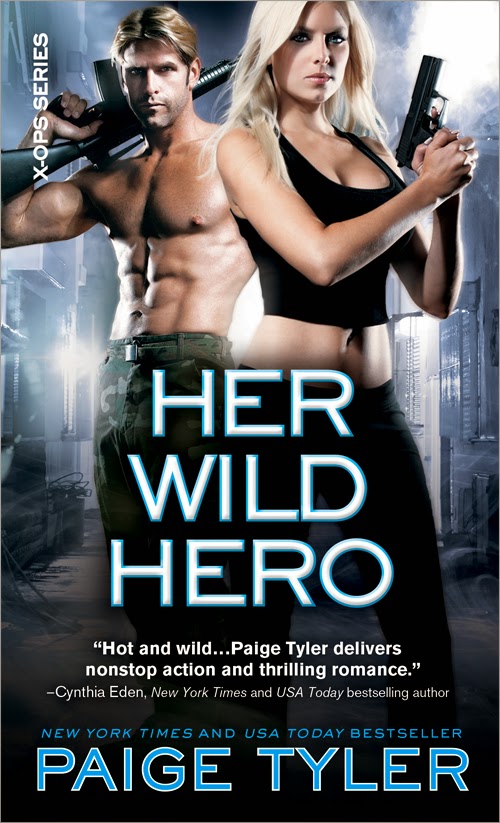 After meeting Kendra and Declan in HER PERFECT MATE (X-OPS 1), I knew they were going to end up together.  Which was why it was so hard to keep it a secret when readers asked which guy the DCO’s resident Jill-of-all-trades was going to fall for. But while I knew Kendra and Declan were going to end up together, you wouldn’t believe how difficult it was actually getting them together. Those two definitely didn’t make it easy for me, but there story was well worth the wait!

Name: Kendra Carlsen
Rank: Trainer, Dept. of Covert Ops
Objective: Get out of the office and into the field

The steamy Costa Rican jungle brings out the bear in Declan MacBride when he and new operative Kendra Carlsen are ambushed. In the midst of relying on each other to survive, and fighting his explosive attraction to Kendra, this shifter is about to lose control…

Being so close to her shouldn’t bother him. He’d gotten over his crush on her and moved on. As he stole occasional glances at her, he knew that was a crock of shit. He’d tried; he really had. But since deciding four months ago that enough was enough and it was past time he stop pining for a woman who refused to even acknowledge his existence, he’d been miserable as hell.

He bit back a growl. Damn, he was pathetic. But there was something about Kendra that attracted him like a bear to honey. He might have chuckled at the analogy if it wasn’t so damn fitting.

Kendra had already been firmly established with the DCO when he’d shown up seven years ago. Back then, she’d mostly shadowed the training officers and watched—taking notes, making her quiet observations and recommendations directly to the trainers. At the time, Declan had been coming off the disaster that was his relationship with Marissa, so he hadn’t been interested in getting involved with any woman.

Plus, he’d been consumed with trying to fit in with his team and learn everything they had to teach him. He had no military training to fall back on, so there’d been a lot to learn. By the time he’d gotten his head above water, he already had it bad for the behavioral scientist.

Unfortunately, he couldn’t string together two sentences whenever he was around her. He wasn’t a Romeo with the ladies by any stretch of the imagination, but he’d never gotten tongue-tied around women—not even his former fiancée. But it wasn’t hard to see why Kendra had that effect on him. She was beautiful and smart, made him smile like no other woman ever had, made the camouflage uniform she was wearing look way sexier than it should, and she smelled delicious as hell.

His nose usually wasn’t that good—mostly because he never used it—except when it came to Kendra. Then it worked just fine. Sometimes he could pick up her scent from the far side of the DCO training complex. Sitting this close to her now, it was the only thing he could smell, and it was overwhelming. He closed his eyes, hoping to block out her scent, but it was useless.

Her pheromones surrounded him, holding him prisoner and refusing to let go.

He’d tried to catch Kendra’s eye for years and fallen flat on his face every time—because she was too busy obsessing over that jerk Clayne Buchanan. It had taken Declan a while, but he finally realized he was wasting his time—and his life—waiting for her and had decided to move on.

And it had been working. He’d gotten to the point where he didn’t think about her 24/7, didn’t subconsciously sniff the air to catch her scent the minute he drove onto the DCO complex. He’d even dated a few women he’d thought might have had long-term potential. There might not have been that same animal attraction he felt with Kendra, and he’d have to hide his shifter side, but that wasn’t too high a price to pay to be normal, right?

Before today he thought he’d been well on his way to forgetting about Kendra and getting on with his so-called life. Then John had decided to send her on this mission and everything Declan thought was in the past came right back and smacked him in the face.

For the first time in forever, he wanted to put his fist through a wall. But as he felt his anger rise again, he realized he wasn’t angry at John or Tate or even Kendra. He was mad at himself for being so screwed up that the mere thought of being in the same jungle as the blond-haired, blue-eyed beauty could get him so twisted up in knots.

Damn, he really was pathetic.

The reviews are already in!

“With HER WILD HERO, the exceptionally talented Paige Tyler proves that she is an absolute master of this genre! Does it get any better than this?! – Fresh Fiction

“The emotions envelope the reader and caress the soul.” – Tea and Book

“Her Wild Hero is an exciting installment in a truly entertaining series.” – Booklist

“If you haven’t picked up this series, get to the bookstore now!” – Anna’s Book Blog

And for everything X-OPS, visit the X-OPS Page on my website at
https://paigetylertheauthor.com/BooksXOPSSeries.html