I’m thrilled to be part of a romantic suspense boxed set with some amazing authors! It’s called The DANGEROUS DOZEN Boxed Set, and it’s just 99 cents! 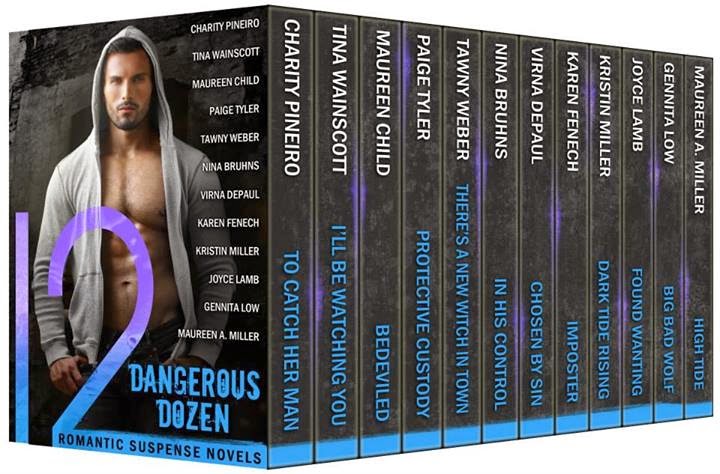 The Dangerous Dozen — Alpha Males who know how to protect their women and how to love them. This romantic suspense boxed set stars TWELVE Smoking Hot Heroes in TWELVE Full-Length Novels by TWELVE Bestselling Authors.

To Catch Her Man by Charity Pineiro, New York Times Bestselling Author. Investigative reporter Sylvia Amenabar must decide between friendship, love and discovering the truth behind a cop’s murder… Undercover detective Carlos Ramirez nearly lost his life protecting Sylvia, but he knows it’ll be a fight to reach her heart. . . Can they learn to trust one another and find out the truth about a failed assignment that nearly killed Carlos? Or will the secrets of the past and family issues cost them the things they hold most dear.

I’ll Be Watching You by Tina Wainscott, New York Times Bestselling Author. Ten years ago, Kim left her steamy Everglades town under a cloud of murder and scandal. Her gran brings her back to reclaim her home and unearth the truth…while a killer watches her every move.

Protective Custody by Paige Tyler, USA Today Bestselling Author. Someone is stalking reporter Paisley McCoy, and police detective Gray Beckham is the only man who can protect her. While the chemistry between them is undeniable, there’s no way he’s going near the captain’s daughter, and she has a hard and fast rule that says she doesn’t date cops. Can they both survive the stalker who’s coming after them long enough to realize how good they are together?

There’s a New Witch in Town by Tawny Weber, New York Times Bestselling Author. Her magic, his town, their love… is it enough? Or will a witch just regaining her powers have to choose between saving a cursed town, or giving up everything she’s come to care about?

In His Control by Nina Bruhns, New York Times Bestselling Author. A rogue detective will do anything to catch the sexy international thief he’s fixated upon. When their titillating game of cat and mouse grows shockingly intimate, he must make the impossible choice between honor and duty…and the notorious woman he has unwittingly come to love.

Chosen by Sin by Virna DePaul, New York Times Bestselling Author. A wounded alpha werebeast bent on revenge… A female vampire trying to save her adoptive dragon-shifter family… Can they stop a group of rebel shape-shifters from unleashing every demon in hell? Only if they relinquish their secrets, face their fears, and open themselves to love.

Imposter: The Protectors Series — Book One by Karen Fenech, International Bestselling Author. Chemist Dr. Eve Collins, wrongly accused by the CIA of developing a chemical weapon, learns someone has set her up as a scapegoat. That “someone” wants her dead. To save her life, she must join forces with CIA Operative John Burke–the man who doesn’t believe her claim of innocence and the man she’s falling in love with.

Dark Tide Rising by Kristin Miller, New York Times Bestselling Author. Police Sergeant Mark Thurgood is all work and no play, but he’s harboring secrets that tie him to the vengeful sea. Free-spirited Emily McAllister is haunted by premonitions, and the latest shows her death in a dark coastal cave. Can they put their desires aside to focus on the task at hand and find the killer before he finds her?

Big Bad Wolf by Gennita Low. On the run from shadowy enemies, a secret agent finds sunlight and love while working undercover for a female roofer.

Found Wanting by Joyce Lamb. She’s been on the run for 14 years. He’s been sent to bring her home, dead or alive. A boy’s life depends on what happens next. Can they overcome betrayal, lies and violence to find what they’ve always wanted?

High Tide by Maureen Miller. A couple locked in a struggle to protect the coast…and their lives.