I’m so excited to finally announce that my paranormal romance, EPIC Award Finalist, 5-Star Reviewed and Winner of the Gold Star Award at JERR, DEAD SEXY is available!

And with the hunky cover model Jimmy Thomas as the hero, zombies never looked so good!

To celebrate, I’m having two release parties tonight, one on Facebook and one on Twitter!  And there will be giveaways!

You can also win prizes in my “Spread the Word about DEAD SEXY” Contest! 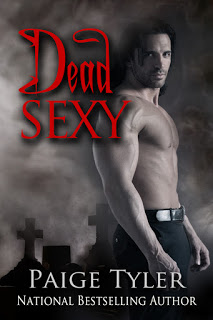 
Author’s Note: NO PEOPLE WERE EATEN IN THE MAKING OF THIS BOOK

Winner of the Gold Star Award at JERR
“You will find yourself reading until
well beyond the witching hour. Thrilling, suspenseful and passionate Dead Sexy
is a wicked read and very deserving of a Gold Star Award!” –
JERR

5
Cherries from Whipped Cream Reviews
“Ms. Tyler has weaved a complex and
original story full of action that will keep you flipping pages. This book is
full of twists, turns and an ending that will leave you blown away!” – Whipped
Cream Reviews

5 Siren Stones from Siren Book Reviews
“When the two
words ‘romance’ and ‘zombies’ are used to describe a book, what is one to think?
For me, after reading Dead Sexy, my thoughts were a whirlwind of ‘wow’. Paige
Tyler made this work. With a great blend of mystery, intrigue, suspense, and
action, and not to forget the love scenes, Dead Sexy kept me going long into the
late hours of the night.” – Siren Book Reviews

Come help celebrate my release of DEAD SEXY on Facebook Tues, July 23 from 4 – 6 PM EST!
There are going to be games and prizes in this 2 hour event that you don’t want to miss!
Sign up here!
http://www.facebook.com/events/577133259005125/
Then help me celebrate the release of my paranormal romance DEAD SEXY on Tuesday, July 23 from 7-8pm EST on Twitter!  I’ll be doing lots of giveaways, so register for the party early!

Get all the details here!
http://events.litconnect.com/twitter-party-dead-sexy-by-paige-tyler/

Happy release day, baby!!! LOVE the new cover! And you KNOW how much I loved this book!!!