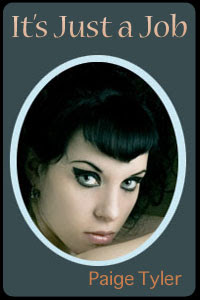 Here’s a never before released excerpt from my contemporary spanking romance It’s Just a Job!

Brooke headed down the street to Starbucks a little before four that afternoon, the agreed upon time she was supposed to meet Alex. Since the coffee shop was well within walking distance from the apartment – something else she loved about the place – it didn’t take her all that long to get there. As usual, Starbucks had a pretty good crowd going, and as she stepped inside, she scanned the room, trying to figure out which one of the men was Alex. Though a few of the men returned her glance with their own interested ones, none of them approached her. Deciding that Alex must not have gotten there yet, she took a place in line, ordered a nonfat latte, and then found a seat at a table that gave her a good view of the door.

A handful of men came in over the next ten minutes, but none of them gave the impression that they were there to meet someone. Except for the totally hot guy who was currently looking in her direction, of course, and there was no way that he could be Kaelyn’s friend, Alex. Then again, Brooke thought, he was making his way over to her table.All at once, Brooke recognized him as the man from the photos in the brochure that Kaelyn had given her to look at earlier – the guy that Brooke had thought was totally gorgeous! In person, though, he was even more handsome, and Brooke felt her pulse skip a beat as she took in his black hair, silver-gray eyes, and all-around chiseled good looks. Then there was his tall frame and well-muscled build beneath the expensive shirt and tie he was wearing. W-O-W! Brooke thought. Why hadn’t her friend told her that Alex was such a hottie?

Coming to a stop beside the table, he gave her a questioning look as he asked, “Brooke?” Robbed of speech at the velvety softness of his voice, all Brooke could do was nod. Pulling out the chair across from her, Alex gave her a smile so sexy that it had her pulse doing jumping-jacks. She decided them and there that she needed to get out more. She hadn’t had this kind of reaction to a guy since she was a teenager. But there was no denying that she had never met anyone who had attracted her this much, at least from a physical standpoint.

“I’m Alex Cunningham,” he said, holding out his hand. “Sorry I’m late, but I got hung up at work.”

Trying to calm her racing pulse, Brooke reached out and shook his proffered hand. “That’s okay,” she told him. “I got here a little early anyway.”

Alex leaned forward, his forearms on the table. “So,” he said, his silver-gray gaze meeting hers. “Kaelyn tells me that you did some modeling a few years back.”

Brooke smiled. “More than a few, but yes.”That sexy smile flashed at her again. “As attractive as you are, I’m surprised you’re not still in it.”

She took an absurd amount of pleasure in his compliment, and could only answer with a soft, “Thank you.”

“Did you mostly do runway or print work?”

“Print,” she told him, taking a sip of her latte. To be honest, she was a little surprised by the question. She hadn’t expected any real work-related questions. She would have thought that this guy would have taken in her good looks, and then bluntly asked if she liked getting spanked. But apparently he took these spanking photos very seriously. “I did it on a whim, really, more to make ends meet at the time than anything else,” she continued. “But I actually ended up enjoying it. Unfortunately, I didn’t keep up a portfolio. I hope that’s not a problem?”

He shook his head. “No, of course not. Kaelyn’s a good friend and I certainly trust her word about your experience. I don’t know how much she told you about the photo-shoots that we do, though.”

Brooke shrugged. “Not much, really,” she admitted, and then added, “Other than the…uhm…subject matter, I mean. And she showed me some brochures, too.”

Brooke hoped that didn’t sound as lame as she thought it did, but Alex merely grinned.

“The first job is a simple brochure. There will be a collage of pictures to show the type of things going on at one of the parties, real basic stuff, you know. Beyond that, I usually need a regular model for the magazine layouts that we do. The photo sets are all couples-centered, so they’re presented in a very romantic way,” he explained. “It’s mostly OTK stuff, with a few other positions thrown in if the scene calls for it, and I don’t usually use anything harsher than the paddle or hairbrush, though I’ll occasionally go with a strap if it fits better with the story we’re trying to portray.”Brooke had no idea what “O-T-K” was, but remembering Kaelyn’s suggestion to act like she knew what Alex was talking about, she nodded her head knowingly didn’t ask for a definition. She couldn’t help but wonder why he was telling her all this stuff about paddles and hairbrushes, though. Who cared what it looked like she was being spanked with? He was acting as if he were actually going to spank her! She did find it interesting that he spoke in the first-person when he referred to using them, however.

Alex nodded. “If that’s okay with you?”Okay? Brooke almost laughed. This was getting better by the minute. Of course it was okay, she thought, nodding in answer to his question.He was silent for a moment. “You probably already know this, but the job does require some partial nudity,” he said. “I just wanted to make sure that you’re comfortable with that.” Not one to usually blush, Brooke was surprised when she felt her face color. Having seen the brochure, she had known that her bottom would be bared at some point during the photo shoot, of course. She just hadn’t realized that a guy as gorgeous as Alex would be the one pulling down her panties. The thought sent a delicious shiver running through her. “I’m fine with that,” she told him. It wouldn’t be much different from most of the lingerie modeling jobs she’d done.

Though she had an almost irresistible urge to continue their conversation, Brooke realized that she probably shouldn’t take up any more of his time. This wasn’t a date, after all. She was here getting a job, and she wanted to look professional. Though she almost had to laugh at the thought of being a professional spanking model. Making up something about another appointment she had to get to, she agreed to meet him at the photography studio the following evening. They shook hands and Brooke slowly made her way through the crowded tables to the door. As she did so, she couldn’t help but wonder if Alex was watching her bottom as she walked away. Though she resisted the urge to look over her shoulder and check, she couldn’t control the impulse to put a little more wiggle into her step.

© Paige Tyler and ABCD Webmasters, 2005
If you’d like to read more about It’s Just a Job, as well as read another excerpt, click here!
Or, if you’d like to go ahead and purchase It’s Just a Job, click here!
And don’t forget to check back next Wednesday for my vision of the handsome Alex Cunningham!
*hugs*
Previous Post Romance Junkies gives Cindra and the Bounty Hunter 5 Ribbons! Next Post Thursday Thirteen!

~Heather – Thanks! You’ll love him!