Welcome to the Howloween Blog Hop!

It’s about a girl going to a costume party and hooking up with a hot masked man.  I think there’s just something inherently sexy about them – you know, no one knows who you are underneath the mask, so you can do anything you want. I wanted to make it even more intriguing, so I thought, what if the heroine goes to the costume party looking for this hot, hunky coworker she’s been lusting after? Of course, she’d have to know what he’s going to be dressed up as for it to work, so I settled on the phantom of Venice. Just sounds mysterious, doesn’t it? To make it more fun, though, I decided to have more than one guy dressed up in the same costume, so the heroine would have to come up with some ingenious way to figure out which guy was the one she was looking for. Admittedly, that was a good idea. Really good. But I didn’t stop there. I wanted the heroine to have even more fun, so instead of making the costume party a regular old Halloween party, I made it a spanking party! For some reason, that always seems to be a big theme in my books! LOL! So, what does the heroine do, you’re wondering? Let every phantom of Venice she comes across spank her until she find the right one? I don’t want to give too much of the story away, but trust me when I say that the heroine has a LOT of fun trying to figure out which guy is the one she’s looking for!

I’m giving away a download of UNMASKED to one lucky commenter! But you have to comment to win! Don’t forget to leave your email!  I’ll announce the winner on 10/30! 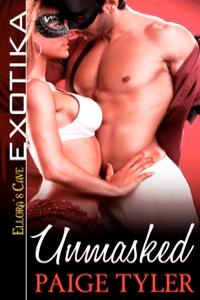 Even though she’d decided she wasn’t going to waste another minute looking for Robert, she found herself walking toward the man as if drawn to him. He was tall with broad shoulders and dark hair, just like Robert. Though she didn’t remember her coworker being quite so tall or well built. Then again, he didn’t often wear a cape and a tricorn hat to Sultry Records, so it was hard to tell. The costume could make him look bigger than he really was.

Watch the trailer and get your copy!
https://www.paigetylertheauthor.com/BooksUnmasked.html

And don’t forget to check out my newest releases while you’re there!  Just click on “Books!”

To visit the other great authors on the hop visit The Blog Hop Spot!
http://thebloghopspot.com/event-page/

Hi Paige, stopping by for the Howloween Blog hop, wow oh wow another huge blog hop!!…It's gonna be a marathon session to visit as many sites as possible in the timeframe allotted…whew! … lol It’s still fun because I’ll be meeting lots of new authors! So, let the games begin! Thanks for the opportunity to win some awesome prizes. 🙂

Woohoo! I love blog hops & this one is HUGE! So many old friends to visit and new friends to meet.
Thanks for being part of the hop and for the chance to win. <^_^>
reneebennett35(at)yahoo(dot)com

Unmasked sounds wonderful. Thanks for the giveaway. Happy Halloween.
kaylyndavis1986@yahoo.com

Your book sounds fabulous! Thanks for the chance to win!

Unmasked is going on my TBR list. Sounds delicious

This book sounds smoking hot and I am so adding it to my TBR list. I love a good costume party story and what a great idea!! Spanking. 🙂 Now that is just my speed.

Would love to have you on the blog sometime for a guest post and a visit.

Oh my, oh my! How I wish that were me feeling those strong, warm hands on my…..(sigh) I love your books, Paige and this one sounds so wickedly fun.
tinapalmer66@yahoo.com

This does look like a lot of fun. I love Spanking stories.

Unmasked sounds wonderful. Thanks for the giveaway. Happy Halloween.

Darn it!! The excerpt ended just when we were getting to the good part. Really enjoyed the storyline & the excerpt, so I'm adding it to my TBRs. Thank you for participating in the huge hop!
JessieL62@comcast.net

Ooh sounds like a fun read. havebookwillsurvive at gmail.com

Ooh-la-la, love the excerpt! Thanks for the giveaway.

There are hops galore this weekend! Hopping thru to wish you a Happy Halloween.

Spank Me, Spank Me
But Please Don't Prank Me!

Thanks for the give away. Love discovering new authors.

This book looks fantastic! I hope I am a lucky contender!
Stephanie
stephstime@cox.net

Really??!!… That is where you stop the excerpt?… So not nice! Can't wait to read the rest… would be even better if I won it!
Maycee Majors
majorsqueenbee@yahoo.com

Hi Paige,
thank you for the at such a great giveaway. i love the cover and the book sounds wonderful. i can hardly wait to see what she does when she finds out.

Great excerpt!Thanks for the giveaway! I love these blog hops! cheryllynne(at)rocketmail(dot)com

Cool! The book sounds good. Thanks for the chance to win.

Thanks for the blog hop, love the excerpt!

Thanks for participating in the Howloween Blog Hop & offering such a HOT Gift of "Unmasked"…WooHoo now that will warm Us up on these chilly night 😉 but yet ALL your Books do that to me! 😉

Whew! I love this!
Thanks for the awesome giveaway!
cassandrahicks1989@yahoo.com

This one sounds great. Love the masquerade party. Thanks for the giveaway.

Oohh! What a tease! I can't wait to read more.
This blog hop is so much fun and I do love prizes (in any form hehe)!
Jessie

Thanks for being part of the Hop.

I read the blurb & excerpt from you book & found it very sexy and interesting. Would be happy to read it.

Wish You All the best,
Adila
(from Azerbaijan)
adilasblog(at)gmail(dot)com

Wow! This one sounds great! Thanks for being a part of the Halloween Hop!
Tamara Monteau

As usual you've turned out another hot read my friend. Who knew your a fan of spanking, lol.

I hope you & hubby have a wonderful Halloween. Thanks for participating in the Hop.

Oh MY your stuff is always so steamy! LOL

Thank you for sharing and doing the giveaway!

I am so excited about this blog hop and your book!

Thank you for the fantastic excerpt and for taking part in the hop.
orelukjp0 at gmail dot com

Happy Halloween!! Thank you so much for the awesome hop and giveaway! 🙂
shadowluvs2read(at)gmail(dot)com

Thanks so much for all the compliments!

The winner of UNMASKED is Kelsey! Congratulations! And thank you to everyone who entered!