You’re thinking, what the heck is she talking about, right? Because you know I always put a little sexy spanking and bongage in my books. At least whenever the h/h will go for it!

I wasn’t sure how this approach would work for me – I usually write in a style that most would call “BDSM-Light.” But I ended up having a really good time with this story, as I hope you will. Trust me – it’s hot, it’s sexy and it’s romantic! 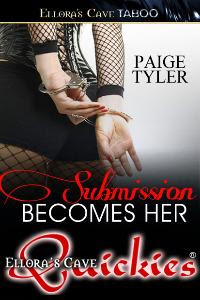 She wants to be dominated by a man and he’s going to help her live out her every
fantasy!

When Josie arrives at the restaurant, she’s stunned to discover “Sir Dom” is none other than her ex-boyfriend Gavin Elliot. She can’t believe it. He might be gorgeous, but when it came to sex, he was about as vanilla as a man could get. Or so she’d always thought.

It turns out Gavin had kept his dream of dominating a woman in the bedroom a secret, too. And now, he’s going to live out every fantasy he’s ever had by tying her up and spanking her until she begs for more.

Without a word, he snaked his hand in her hair and with a firm, but gentle tug, tilted her head back. The show of dominance made her go gooey inside and she gripped the front of his shirt for support as he claimed her mouth in a scorching kiss.

“Tonight, and for every night after, you’re going to be my submissive when we’re in this room, and I will be your master,” he rasped. “Is that understood?”

“Tonight, and for every night after, I will be your submissive when we’re in this room,” she promised. “And you will be my master.”

The words were a vow, and as she said them, Josie knew they tied her to Gavin as completely as if they were married.

Taking her hand, he picked up one of the leather cuffs from the bed and slipped it over her wrist, tightening it so that it fit snuggly. Then he did the same with her other wrist. Her heart was beating so loudly she was sure he must be able to hear it, but he made no comment as he led her over to the foot of the bed. Turning her to face it, he put his hand on her back and bent her over the bed. She wondered if he was going to cuff her hands behind her back with the sturdy- looking hooks that were attached to the leather. The image sent a quiver through her.

But he instructed her to put her hands above her head. She started to ask why, but remembered the vow she’d made and caught herself. She rested her cheek on the coverlet and obediently placed her arms out in front of her on the bed. Gavin took her right wrist and slid her arm closer to the edge of the bed. A moment later, she heard a click as he attached something to the leather cuff. Or rather, attached the cuff to something on the bed. She automatically gave her wrist a tug, but it wouldn’t give. That was when she saw the strap hanging over the side of the bed. It was some kind of restraint system, she realized as Gavin secured her other wrist to the opposite side of the bed. She gave that one a tug, too, but it was just as tightly bound as the other.

“Spread your legs,” he said softly.

Josie was so busy thinking about the restraints on her wrist, she didn’t realize Gavin had come around the bed to stand in back of her. Afraid he would think she’d forgotten her place already, she quickly spread her legs. It was only after she did that she realized just how vulnerable she was in that position, and as Gavin fit the leather cuffs around her ankles, she had to fight the urge to close her legs.

She expected him to secure them to the bed the same way he’d done with her wrists, but instead, she felt him attach something to the inside of the cuff around her right ankle. When he did the same to the cuff on the left one, she realized it was some kind of bar designed to keep her legs spread. If she’d thought she felt vulnerable before, that was nothing compared to how helpless and exposed she felt now. It had her so wet, she was practically gushing.

She sensed Gavin straighten up behind her. She automatically tensed, waiting for him to reach for either the paddle or the leather strap—both of which were still on the bed and in view. But he only ran his hand over the curve of her ass. Then gave it a firm squeeze.

Buy it at Ellora’s Cave!
http://www.jasminejade.com/p-9765-submission-becomes-her.aspx