The Girl Next Door! 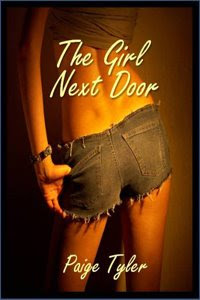 I’m thrilled to announce that I have a brand new sexy, contemporary spanking romance out called The Girl Next Door!
Unlike her roommate, Amber Bennett isn’t into spanking, which makes her dubious about attending a weekend spanking getaway in the Bahamas. But her friend assures her that Amber can go do her own thing and will never know there’s any spanking going on.
It turns out that her roommate is right. Not only does Amber not hear a single spank the whole time she’s there, she ends up having a wonderful, relaxing vacation. To make it even better, she meets an absolutely dreamy guy. She and Colt Forrester immediately hit it off, and sparks are flying between them before they even make it back to his room. Colt’s hot looking, a great kisser, and on top of that, he lives in New York, just like she does. Who knows? she thinks. Maybe they could even date once they got back home. Could it get any better?
But will Amber still feel the same about Colt after the evening takes a surprising turn and she learns that he’s into spanking?
Excerpt:
While the conversation might have come easily, Amber had to admit that she still found it difficult to focus on what Colt was saying during most of it. More than once, she found herself getting lost in those sexy blue eyes of his. And when she wasn’t doing that, she was gazing down at his strong hands and imagining what they would feel like caressing her body. Maybe it was a good thing she hadn’t met him the first night she’d been there, she told herself as they shared dessert, otherwise she might have spent the whole vacation in bed. Which wouldn’t necessarily have been a bad thing, she decided as she watched him lift a forkful of cake to his mouth and close his lips over the decadent dessert. Dear God, she could sit and gaze at him all night!

She and Colt probably would have sat there, too, if the waitress hadn’t come by for what seemed like the hundredth time asking if she could get them anything else.

“I think that’s her subtle way of telling us to leave,” Amber said as the girl moved off.

Colt chuckled. “I think you’re right,” he agreed. “But that doesn’t mean the evening has to end just yet. Want to come up to my room for a drink?”

Amber felt her pulse skip a beat at the look in his sexy blue eyes. He was asking her up to his room for much more than a drink, she knew, and she hesitated for a moment. She usually didn’t sleep with guys until the third date, but Colt was really hot. And she was on vacation, she reminded herself. From everything…including her three-date rule.

Colt’s room was on the eighth floor, but because the elevator stopped on every floor in between to let people on and off, it seemed like the ride up took forever. Now that Amber had made the decision to sleep with him, she was impatient to get his clothes off and see if he really was as well-built as she’d thought. By the time they stopped on Colt’s floor, Amber was ready to push him up against the wall in the corner of the elevator and have him right there.

Which was why when Colt asked what she’d like to drink once they got to his room, she gave him a sultry smile and said, “You really didn’t ask me up here for a drink, did you?”

He let out a soft chuckle. “Not really.”

“That’s what I thought,” she said. Sliding her hands up the front of his button-up shirt, she gently pulled him close for a kiss.

Colt’s mouth was firm and insistent on hers, and she melted against him with a little sigh of pleasure as his tongue intertwined with hers. Damn, the man could kiss!

Sliding one hand in her hair, he ran the other over her hip to cup her bottom. She could feel the heat from his skin through the thin material of her skirt, and Amber moaned her approval against his mouth.

Colt abruptly tore his mouth away. His breathing was ragged as he gazed down at her. “I want to…” he began, but she didn’t let him finish. Instead, she kissed him again.

Letting out a groan, Colt took her hand and led her over to the chaise. Amber went eagerly. She’d never had sex on one of those before. This was going to be fun!

But to Amber’s surprise, Colt didn’t pull her into his arms when he sat down, but guided her over one of his legs so that she was draped over the chaise’s cushion. She automatically pushed herself up onto her elbows, all set to ask what he was doing when she felt him caress her upturned bottom. Oooh, she thought as he ran his hand over her ass. That was nice. Very nice!

Settling back down on the chaise, Amber let out a soft, little moan, only to gasp in surprise a moment later when she felt him give her ass a light smack.

Her eyes went wide. Had he just spanked her?!

But then Colt was lightly caressing her bottom again, and she was sure she must have imagined the smack. Telling herself that must have been it, Amber relaxed against him and let herself enjoy what he was doing.

Amber tensed. Oh God, she hadn’t imagined it. Colt had spanked her! Was still spanking her, she corrected, letting out another startled little gasp as his hand came down on her bottom again.

She opened her mouth to protest, even thought about pushing herself to her feet, but she was so stunned that this gorgeous guy was actually spanking her that she could do no more than lie there and let him keep doing it.

What the heck had made Colt think she was into spanking? Did she look like a spanko? She didn’t think so. Then again, she thought, neither did he. In fact, he looked completely normal. It just went to show that you couldn’t go by looks, she told herself wryly.

The spanks were falling harder now, Colt’s hand smacking rhythmically against her ass over and over. Then, all at once, the spanking stopped and he was caressing her ass again. His hand felt so good after the stinging smacks that Amber had to bite her lip to stifle a moan.

That brought her head up sharply. She was not actually enjoying this, was she? The thought made her blush. Okay, that was it. She was putting a stop to this right now before she did something to really embarrass herself!

Hi Paige. This book sounds great. Really enjoyed the blog, was so glad that LASR picked yours and sent me over. have a great day

I think my comment was eaten in cyber space. Any way I really enjoyed this blog and am so glad that LASR picked yours and sent me over. The book sounds fantastic.

LASR – Thanks so much! I’m so flattered!

Sarabelle – Thanks so much! It’s a really cute, sexy story!