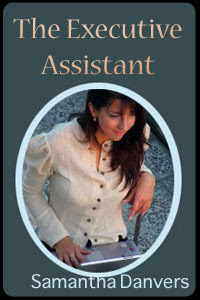 Here’s an excerpt from my contemporary spanking romance The Executive Assistant, written under the name Samantha Danvers.

It was all part of her plan to get Blake to spank her again. She wouldn’t do anything to make her boss rethink his decision to keep her as his assistant, of course, just enough to earn herself another spanking. And showing up late for
work was a good start!

Much to Sydni’s delight, her tardiness did not go unnoticed. When she walked into the corner suite, Blake was pouring himself a cup of coffee, and he looked up with a frown.“You’re late,” he pointed out as he set down the coffee pot.

She gave him her sweetest smile. “Really?” she said, walking over to her desk. “I hadn’t noticed.”

He lifted a brow at that, but made no further comment, other than to ask her to come into his office. Her pulse fluttering, she quickly shoved her purse into the bottom drawer and hurried into his office.

However, much to her dismay, Blake hadn’t called her into his office to administer another spanking, but to have her take down a letter. Flustered, and a little frustrated that her plan hadn’t worked as well as she would have liked, she went back into her office to retrieve her steno pad from her desk. But then again, she reminded herself as she took a seat in one of the chairs in front of Blake’s desk, her boss hadn’t spanked her for just that one infraction the first time, so it made sense that it would take a few things to get him to give her one this time. Besides, she told herself with a smile, the anticipation was half the fun!Not wanting to make what she was doing seem too obvious, however, Sydni was on her best behavior for the rest of the day, making sure all of her work was perfect. She even came in on time the next morning, though she made sure she got back from lunch a few minutes late. That earned her another frown, but no spanking, and by mid-week, she decided that she needed to up the ante a little.

Her opportunity came that afternoon. Blake had asked her to type up several letters to various people, and on each one, she “inadvertently” spelled his surname wrong, leaving off the “s” on Daniels. Putting the stack of letters on his desk for him to sign, Sydni gave him a smile, and then went back to her desk. Knowing that Blake would read over each letter, she figured that it could be awhile before he took her to task for the misspelling of his name, but he came out of his office almost immediately after she sat down. “There are typos on every one of these, Ms. Davis,” he said, holding them out to her. “I find hard to believe you could misspell my name after working for me for this long. Please make the corrections and bring them back into me for signature.”Sydni frowned as she watched him disappear back into his office. That was it? Please
make the corrections and bring them back into me for signature? Perturbed, she turning back to her computer, banging on the keys as she made the corrections. What was it going to take to get that man to spank her again?! she wondered.

Throwing caution to the wind, Sydni not only showed up late for work the next day, but made several obvious typos on another stack of letters, including spelling Blake’s last name wrong again. When that got her called into his office that afternoon, she was sure her boss was finally going to spank her, but all he did was point out her mistakes. Granted, he was clearly angry that she’d spelled his name wrong again, but obviously not enough to spank her.

Which was why she pulled out all the stops on Friday. Not only did she show up late for work again that morning, but she also came back a little late from lunch, too. Both earned her a scowl from her handsome boss, but nothing else.However, determined to get that spanking she’d spent the whole week fantasizing about, Sydni made some obvious typos on a report that she did for him, and then rounded out the day by “accidentally” disconnecting an important call from one of the executives at the Dallas office while ostensibly trying to transfer it to Blake’s phone.

That evening, Blake came out of his office. “Ms. Davis, may I see you for a moment.”There was something about the way he said the words that had Sydni’s pulse skipping a beat. Pushing her chair back, she got to her feet. “Of course, Mr. Daniels.”

Her pulse fluttering, Sydni walked across the room and into his office, her knees going suddenly weak when she heard the door close. Had her efforts finally paid off? she wondered excitedly. Was her boss going to spank her? Oh God, she thought. She hoped she hadn’t pushed him too far. She didn’t want to end up getting fired.“Your work has been slipping lately, Ms. Davis,” Blake said as he came into the room. “Not only have you been late several times, but your work has also gotten sloppy again.”

He lifted a brow. “Really?”

She nodded. “Y-yes,” she said, and then let out a melodramatic sigh. “You’re going to say that I need another spanking, and you’re absolutely right. I need something to help me focus on my work again.”

Unable to believe how bold she was being, Sydni walked over to the desk, flipped up her short skirt, and bent over, revealing the skimpiest pair of black bikini panties she had in her wardrobe. Little more than a tiny triangle in back, they barely covered her bottom, which was exactly why she had chosen to wear them that day. And since she didn’t wear pantyhose in the summer months, he not only had a perfect view of her ass, but of her long shapely legs as well.

Hands on the desk, she looked over her shoulder to see her boss regarding her with what could only be called amazement in his dark eyes. So, her usually self-assured boss was put off-balance, was he? Good, she thought. Giving him a saucy look, she let her lips curve into a smile. “I’m ready, Mr. Daniels.”

If you’d like to read more about The Executive Assistant, incuding another excerpt, click here!
Or, if you’d like to go ahead and purchase The Executive Assistant, click here!
And don’t forget to check back next Wednesday for my vision of the sexy Blake Daniels!
*hugs*
Previous Post Thursday Thirteen! Next Post Thursday Thirteen!