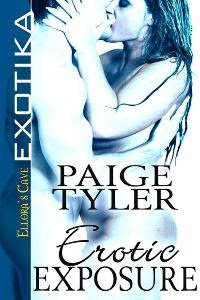 Liz Bellamy agrees to pose for a provocative calendar to help raise money for the animal shelter where she volunteers. Although it’s for a good cause, she’s a little shy about posing half naked.

When she arrives at the photography studio and finds hot photographer Kent Draper waiting for her, she almost chickens out, but decides to go through with it anyway. Not only does she end up having one heck of a sexy photo shoot, but discovers being half naked in front of a hunky photographer and his camera is one hell of a turn-on. And when a girl gets that aroused, a little shyness isn’t going to keep her from getting what she wants.

Kent dropped to one knee in front of her, camera at the ready. “Okay, now that Godiva’s out of the room, show me your best sultry look.”

Liz wasn’t exactly sure she knew how to do sultry, but she decided to give it her best shot. Putting her hands on the floor in front of her, she leaned forward to flash him a little more cleavage and gazed at him from beneath lowered lashes.

She giggled at the words, unable to help herself.

He came out from behind the camera to give her a curious look. “Why’d you stop? That was perfect.”

“I’m not so sure sultry is a good look for me,” she told him.

“I beg to differ. And so does the camera. But if you don’t believe me, do the same thing and this time check yourself out on the monitor.”

Hoping she didn’t look as silly as she felt, Liz struck the same pose, then glanced at the monitor after he’d snapped the picture. What she saw made her do a double take. With her full lips parted, her blue eyes half hidden underneath a thick fringe of dark lashes, and the tops of her lace-covered breasts peeking out enticingly from her silk robe, not only didn’t she look silly, she looked like the very definition of sultry. That thought sent another current of excitement shooting through her pussy.

“Beautiful,” Kent said. “Now let your robe slip off your shoulders a little for me.”

Liz did as he asked, waited for him to take a picture, then impulsively lifted her hair up with her free hand and blew him an air kiss over her bare shoulder.

He chuckled. “That’s it. Show me some more. Have fun with it.”

She dropped her hand, letting her hair fall down her back as she shifted positions. Lying over on her hip, she leaned forward to give him a sexy come-hither look. As she did, the robe slid down to her elbows, completely exposing her lace-trimmed bra to the camera and the man behind it. Kent’s low groan of approval was all the encouragement she needed to keep going.

Buy it at Ellora’s Cave!
http://www.ellorascave.com/

And for a sneak peek at Just Right and Good Cop, Bad Girl, my other upcoming releases from Ellora’s Cave, visit my website at https://www.paigetylertheauthor.com/ComingSoon.html

You know you can count on me to pick it up!!! It sounds terrific and I can't wait to get my eyes on it. LOL!