I’m so excited to announce that TWO COPS, A GIRL AND A PAIR OF HANDCUFFS, the second book in my Badge Bunnies Series, is now available! The title kinda says it all, but if you haven’t guessed, it’s a hot cop menage with two guys who come with their own handcuffs and a girl who can’t wait to get busy with them both!

After you read the excerpt, don’t forget to check out my hot hunk! 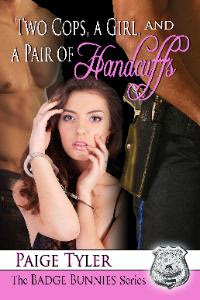 She looked at them from beneath her lashes, hoping one—or both—of them would pick up on her interest and ask her out. Of course, if they both did, she could be in trouble. Which one would she pick?

Hayes leaned forward, resting his forearms on the table. His hazel eyes were more green than brown, with little gold flecks. “Do you have a boyfriend, Cilla?”

That was easier than she’d thought. She was afraid she might have been too subtle.

She wanted to finish her degree as quickly as possible, which meant taking a full course load every semester, so she hadn’t had much time for a social life. But now that she was just a few classes away from graduating, that wasn’t a problem.

“What about you?” she asked. “Are you seeing anyone?”

“We’re both between relationships,” Reed said.

Was that his way of telling her he was interested in her, too?

Cilla looked from one cop to the other. “Hard to believe some girl hasn’t scooped up two attractive guys like you.”

“It’s hard finding a woman who can handle us,” Hayes answered.

That was an interesting way to phrase it. Hayes hadn’t said it was hard finding women who could handle them, or their jobs. But a woman—singular—who could handle them—plural. Had it simply been a Freudian slip, or had he been referring to what she thought he was? The image made heat pool between her thighs, and she squeezed her legs tighter together. She’d never been with two guys at the same time before. Never even considered it. But now that she thought about it, the possibility was intriguing.

Had she just said that out loud? Well, she had to gauge their interest, didn’t she?

Since they were both gorgeous and unattached, she wasn’t going to pass up the opportunity, that was for damn sure. This might be her only chance to fulfill her fantasies—with not one, but two hot cops.

“It’s almost closing time. I should probably clean up.” Her heart sank as Hayes and Reed pushed back their chairs. “You don’t have to leave.”

“Oh.” Relief coursed through Cilla and she smiled. “That’s very nice of you.”

Wishing there was something else to clean up, she picked up her messenger bag. “I know you’re probably not supposed to do this, but do you think you could give me a ride to the subway? I’d really hate to have to walk all that way in the rain.”

Hayes exchanged looks with Reed, then gave her a grin. “We’ll do you one better and give you a ride home. Although I’m afraid you’ll have to sit in the back. That’s not a problem, is it?”

She winked. “As long as I’m not under arrest.”

“Definitely not.” Hayes looked her up and down. “It would be a true crime if anyone ever had to lock you away.”

The heat in his eyes made her pussy purr. “And no cuffs, right?”

Reed gave her slow smile. “Only if you don’t behave yourself.”

The smolder in Reed’s eyes conveyed his message loud and clear—if you want to be cuffed, I’m your man. That image made her pulse skip a beat. This night was getting more interesting by the minute.

Cilla’s hand trembled a little as she locked up the shop. Dropping the keys in her purse, she turned to open the umbrella she’d borrowed, but Reed took it from her.

His mouth curved as he held it over her head. “Allow me.”

Cilla had never been in a police car before. It felt really strange being behind the metal cage that separated the back seat from the front. Like she was their prisoner for them to do with her whatever they wanted. The idea sent a delicious, little shiver through her.

In the front, Reed was on the radio, telling the station he and Hayes were going off shift. Was it just her imagination, or had Reed made the call so she’d know he and Hayes were free for the rest of the night?

Hayes glanced at her over his shoulder. “Where to?”

Cilla rattled off her address. She was about to give him directions, too, but as he pulled away from the curb and headed in the right direction, she decided he mustn’t have needed them. Then again, he was a cop. He probably knew every street in the city.

She didn’t live far from the coffee shop, so it wouldn’t take long to get to her apartment. Which meant she was going to have to think of something quick if she didn’t want the evening to end on her doorstep.

As Hayes pulled up to the curb a little while later, she leaned forward. “I know it’s late, but would you guys like to come in for coffee?”

The two cops exchanged a glance before Reed answered.

She’d had guys at her place before, but Reed and Hayes seemed to dominate her small apartment with their presence. She could barely concentrate on making the coffee as they looked around.

“You go to the University of Colorado?” Hayes asked from the living room.

She glanced up to see him thumbing through an accounting book she’d left on the coffee table. “Yeah. I take morning classes there three days a week. That’s why I get stuck on the late shift so much.”

Reed crossed the room to look over his partner’s shoulder. “Accounting, huh? How close are you to your degree?”

“Three more classes after this semester.” She switched on the coffee pot, then walked into the living room. “I’m getting close enough to taste it.”

Reed’s gaze caressed her. “I know how that feels, being so close to something you can almost taste it.”

Cilla got the feeling he wasn’t talking about getting his college degree. Her breath came a little faster, and she ran her suddenly damp hands down the front of her jeans.

Back at the coffee shop, she thought she’d be able to play it cool, but now the two men were in her apartment, that was harder than she thought.

But what was she supposed to do—rip off her clothes and throw herself naked across the kitchen table? How could she tell them she was game without coming out and saying it?

Hayes was looking at another one of her books—this time it was advanced calculus.

“Have you always been good with numbers, Cilla?”

Now there was a sexy subject. Yeah, not so much. Maybe she should tell him she wanted to multiply with him. Nah, maybe not. That sounded creepy.

Hayes set the book on the table, then sauntered over to stand in front of her. He gave her a devastating smile. “And I bet a math-minded girl like you probably even has a favorite number, don’t you?”

The funny thing was, she did. But she didn’t think they really wanted to hear why she thought 3.14 was so cool.

“Actually,” she looked up at his from under her lashes, “I’ve always been partial to the number three.”

“Three, huh?” Hayes’s smile broadened. “And what’s so special about the number three?”

Reed had come over to stand behind her. Not close enough that he was touching her, but still sandwiching her between him and his equally armed-and-sexy partner.

She took a deep breath. Now or never.

Hayes leaned in close. Behind her, she felt Reed’s big hand trace across her back.

“Yeah, Cilla.” Hayes’s voice dropped to a husky whisper. “I think we do.”

His lips were just a few inches away from hers when an insistent beeping came from the kitchen.

He jerked his head up, looking in the direction of the sound. “What the…?”

Cilla couldn’t help laughing at the expression on his face. “It’s my coffee maker. It beeps when it’s ready.” She caught her bottom lip between her teeth. “I can go get it, if you want.”

Reed’s arms slipped around her waist, pulling her back against his hard chest. “I think the coffee can wait, don’t you?”

His voice was rough in her ear, his breath warm. She moaned as she felt his erection against her ass. At least she thought it was his cock. She supposed it might have been another kind of weapon. She wiggled her ass slowly back and forth to check. Oh, yeah. That was all cock back there. A seriously impressive one at that.

“I’m okay with letting the coffee wait,” she murmured.

She was so entranced with Reed’s shaft and what he was doing to her that she almost didn’t remember Hayes until he tipped up her chin and touched his lips to hers.

The spark of sexual electricity that jumped between them definitively got her attention.

She melted into his arms and opened her mouth to his playful tongue. He tasted like coffee and pure, unadulterated male.

Buy it at ARe!
http://www.allromanceebooks.com/product-twocopsagirlandapairofhandcuffsthebadgebunniesseries-779971-144.html

To check out the first book in the series, SEDUCING OFFICER BARLOWE, visit my website at https://www.paigetylertheauthor.com/BooksSeducingOfficerBarlowe.html

The third book in the series is coming soon! 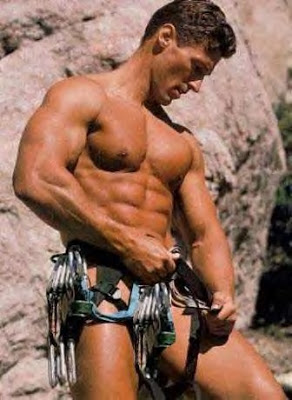 Please turn on Javascript to read or leave comments.