There’s a blog hop this weekend, and you could win some very sexy books, including one from me –THE GIRL WHO CRIED WOLF! But you MUST comment on this blog to win! Oh, and be sure to leave your email address!

I’m excited to announce I’ve got a new release out with Blushing Books called THE GIRL WHO CRIED WOLF! It actually came out years ago and has been out of print for a while, so I’ve reworked it. This version is totally different – and I think better – than the original. I’m excited about it! Hope you will be, too! 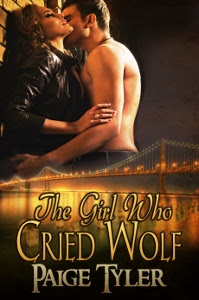 Kat kept her legs wrapped around him long after her orgasm had subsided. She loved the feel of him inside of her and didn’t want to let him go just yet. But they couldn’t stay locked like that all night or they’d both be stiff come morning. So, when Reese kissed her and rolled over onto his back, she willingly curled up in his arms.
“Mmm. Maybe I should call and tell you someone followed me home more often.”
Beside her, Reese stiffened, the hand he’d been rubbing up and down her arm going still. “Wait a minute. What?”
Uh-oh.“N-nothing. I just meant that I knew you’d come if you thought I needed you.”
She cringed inwardly. Crap. That hadn’t come out any better.
Reese swore under his breath. “I can’t believe I fell for this.”
Kat pushed herself up on her elbow, which was a mistake. All it did was give Reese room to kick free of the blanket and get to his feet.
“Fell for what?” she asked.
“You know damn well what.” He glared at her as he pulled on his jeans, then reached for his shirt. “No one followed you home. You made that whole thing up.”
Kat’s stomach tightened into a knot as he snatched his gun holster from the floor and shrugged into it. Everything had been so perfect. Why did she have to open her big mouth and screw it up?
“I didn’t make up anything,” she insisted. “Someone was outside the door.”
That part was true, at least. But Reese wasn’t buying it. He picked up his jacket and stormed out of the bedroom.
Double crap.
Somehow Kat scrambled out of bed without getting tangled up in the blanket and falling on her face. She threw on her robe, trying the belt as she hurried after him.
“Reese, wait! I didn’t make anything up. Why would I do something like that?”
He spun around to face her, his dark eyes glinting. “Oh, I don’t know. Maybe to trick me into coming over here so you could get me into bed.”
Kat felt her face turn red. “Do you even know how stupid that sounds?”
“Actually, it sounds pretty damn clever to me. But then you always did know how to get me to do whatever you wanted.”
She almost laughed. If that were true, she wouldn’t have to resort to this kind of underhanded crap to get him to see reason. “Now, you’re just being a jerk, and I’m not going to stand here and defend myself to you. Next time some strange guy follows me home, I’ll go ahead and invite him in.”
“Don’t be stupid.”
She folded her arms. “First I’m clever, and now I’m stupid. Which is it, Reese? Because if I really had the ability to make you do whatever I wanted, I’d make you see you’re the one who’s being stupid. Regardless of what you say, you want me just as much as I want you—the bed-shaking sex we had in there proves that—and if calling you every time I think someone follows me home is what it’s going to take to get you to admit it, that’s what I’ll do.”
The muscle in his jaw flexed. “No, you won’t, because I’m going to make damn sure you don’t.”
Before Kat could even ask what he meant, Reese grabbed her arm and marched her over to the couch. But instead of plunking her down on one of the cushions and lecturing her like she thought he would, he sat down and gave her arm a tug that sent her tumbling over his knee. She immediately tried to push herself up, but a firm hand shoved her back down.
“Reese, what…”
The rest of what she’d been going to say ended in a gasp as his hand come down hard on her upturned ass. Her eyes went wide. What the hell? Was he actually spanking her? He smacked her again, harder this time. He was spanking her!

To get your copy, and to read more sexy excerpts from my other books, visit my website at https://www.paigetylertheauthor.com

Don’t forget to comment to win a download of THE GIRL WHO CRIED WOLF!  I’ll announce the winner on Monday!

Click on the link below to visit the other blogs on the tour!

Ohmahgosh, love the excerpt and I´ve wanted this book for a while, it´s on my TBR list *grabby hands*
Thanks for the giveaway & Happy Friday!
//Linda

Thank you for sharing ..I will check out your other ebook

Paige, I LOVE your badge bunnies series and this excerpt looks like this is another fantastic read. Thanks for being a part of the hop. Carin mawmom at gmail dot com

O.O i need this book so bad now. I loved the excerpt.

Sounds like a great read! 🙂 I will definitely read this.

What a COOL idea for a story! (It makes the rest of us who have done crazy things to get a guy's attention seem a little less so…). Reese and Kat interact so uniquely in the excerpt, and I'll bet the whole story is full of that awesome tension. I can't wait to see how this one ends! (Laday2727@gmail.com)

I have been looking for this book. No wonder I could never find it. I'm so glad you revamped it and now I've got to win it, since my hubby took the credit cards away. 🙁
Thanks for being part of the hop and for the chance to win. <^_^>
reneebennett35 (at) yahoo (dot) com

I love this cover, and this book is going on my tbr list.
bekahcpht@yahoo.com

Great excerpt! I was looking at this book just the other day!

I do love your work! I just picked up another one of your Blushing titles a few days ago, but haven't had a chance to read it yet.

Oh she so totally deserved that spanking! lol Great excerpt. Thanks for sharing!

Oh yeah! I'm liking this book. The excerpt hooked me. Here's hoping I win a copy. I would luv to read it. At any rate it's on my TBR list.

Thanks for the opportunity to get to know you.

Wowza, Paige! I missed picking this one up–gotta love a woman who goes after what (who!) she wants, and a man who won't be played 😉

what a great excerpt… I am puttin this on my tbr list.. sounds pretty awesome.

Great excerpt with great characters! Love this genre and would love to win a copy!

The things ppl do for love lol

Great excerpt ! I would love to win this book .

THE GIRL WHO CRIED WOLF sounds great! I would love to read it. Btw, I don't think getting spanked would teach me a lesson either 😉
June
manning_J2004 at yahoo dot com

"The Girl Who Cried Wolf", sounds like a brilliant book and the cover is stunning. I love the backdrop of the bridge. It's beautiful. Thank you so much for the chance to enter!

Thank you again for the chance to enter 🙂 Happy Earth Day tomorrow.

I love brother's best friend scenarios. Congrats on your release!

I love brother's best friend scenarios. Congrats on your release!

Okey dokie then, I want to have The Girl Who Cried Wolf.
This pair sounds like fun.
koonie2888 at yahoo dot com

This sounds awesome! Id love to get my hands on a copy! Definitely one i cant wait to read! Thank you!
shadowluvs2read(at)gmail(dot)com

Well, hello there, you 'Awesome Author' you! I have read many of your books and will continue to read them, as you are an 'Amazingly Awesome Author'! You deserve all the success there is to offer an author as wonderful as you & your books are… I feel extremely lucky to have found your books. My mind has been opened up to a fantasy world that I can escape to and live through your sensual stories & sinfully sexy characters! Thank you Paige Tyler, for putting your amazing stories to print for women like me who can't & won't live without the gift of reading! 😀

Thank you so much for entering to win THE GIRL WHO CRIED WOLF, and for the compliments! I'm so flattered!

The winner is June! Congratulations!