DEAD SEXY has a COVER and it’s DEAD SEXY! A new one from Ellora’s Cave!

Isn’t it too hot for words?! When the art department at EC sent it to me, I probably gazed at it for a good ten minutes in mouth-drooling appreciation before I could email them back telling the artist it not only rocked, but totally fit the book. The hero is “Dead Sexy,” after all! LOL! 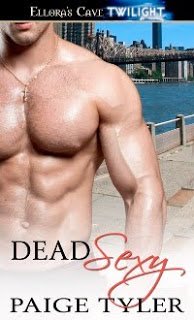 Being with Simone reminds him of everything he was forced to give up and Drake finds himself feeling things for her that he hasn’t felt in a very long time. When the Voodoo priestess learns of their relationship, however, she comes after him again. She doesn’t believe Drake has paid for his sins and is determined to make sure he won’t have a future with Simone.

I can see why you drooled over it for so long. Great cover!

Yum! Thanks for the eye candy, both Tuesday and Wednesday!