A Date for the Wedding! 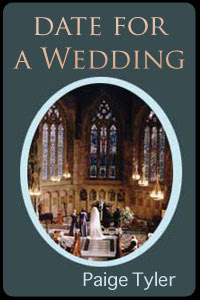 Here’s a never before released excerpt from my contemporary spanking romance A Date for the Wedding!

Holden was waiting for her with the car door open. She didn’t say a word, but simply got in and closed the door. Neither of them said a single word all the way back to San Francisco. Painfully aware of Holden beside her, Sabrina sat with her arms folded and stared blindly out the passenger window. All she had wanted to do was show Todd what a mistake he’d made by dumping her. Now, she was going to have to work with a guy after possibly the most embarrassing event in her life. What if Holden told other people in the office? She blushed red at the thought.

Sabrina let out a sigh of relief when they pulled up outside her apartment. Wanting nothing more than for the awkward date to end, she hurriedly unlatched her seat belt, but before she could even get it undone, Holden was out of the car and coming around to open the passenger door for her.

“You don’t have to walk me to the door, you know,” she said tartly when he fell into step beside her.

On the doorstep, Sabrina turned to face him. “A gentleman wouldn’t have spanked me!” she told him. Her bottom still stung!

Holden’s mouth quirked. “He would if the lady in question deserved it.”

Her eyes narrowed as she tried to think of a retort, but nothing came to mind, and so, she had to settle for rummaging in her handbag for her key. Thrusting it into the lock with more force than necessary, she pushed the door open and went inside without another word. Turning, she would have closed the door behind her, but was surprised to see Holden still standing on her doorstep.

He lifted a brow. “No goodnight kiss?”

In answer, she slammed the door in Holden’s face, only to hear his mocking laugh as he turned and walked back to his car. Damn him! Sabrina thought. She had never met a more irritating man in her entire life. And then, as she stood there, leaning back against the door, the same horrifying thought again occurred to her as she realized that she would have to face Holden McKenna at work the next day. She knew there was a reason that she never dated co workers.

© Paige Tyler and ABCD Webmasters, 2005
If you’d like to read more about A Date for the Wedding, as well as read another excerpt, click here!
Or, if you’d like to go ahead and purchase A Date for the Wedding, click here!
And don’t forget to check back next Wednesday for my vision of the sexy Holden McKenna!
*hugs*
Previous Post Thursday Thirteen! Next Post Thursday Thirteen!