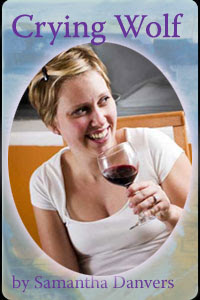 Here’s an excerpt from my contemporary spanking romance Crying Wolf, written under the name Samantha Danvers!

As they ate dinner, Kat kept the conversation light, just like she would have if they were simply two friends having dinner, that’s all. Picking a safe topic, she talked about the latest clients she had, a newly married couple that wanted every room in their house decorated in white. Reese was tense in the beginning, probably thinking she was up to something, but it wasn’t long before she had him laughing at the way she had to convince the couple that painting the inside of the fireplace white was a bad idea. Once he began to relax, she kept the conversation going with a few more decorating anecdotes. Before long, Reese had gotten so comfortable that he began telling her about his day. Though she enjoyed listening to him, she was careful not to push, but instead, just let him talk about whatever he wanted to talk about.

After dinner, Reese helped her clear the table and load the dishwasher, and though Kat kept her movements subtle, she made sure to stand as close to him as she could while they cleaned up, brushing his arm with hers, or reaching for a plate at the same time he did so that their hands would touch. If Reese was on to her little game, he made no comment, though she had the feeling he might be catching on when she “accidentally” splashed water on herself just so that she could make a show of running her hands over her breasts as she wiped it off. The water combined with her touch to make her nipples harden beneath the cami-top she was wearing and poke out against the thin material. For a moment, Reese stared down at her softly rounded breasts as if mesmerized before he finally dragged his gaze away. Score! she told
herself.

Announcing that she’d stopped at the bakery and picked up a cheesecake for dessert, Kat insisted that Reese sit while she served it. She had been afraid that having dessert might be a bit much, especially since he knew that she didn’t normally eat dessert in the middle of the week like this, but she was trying to woo him. And if she didn’t have to be so concerned with doing it on the sly, she would have gone all out and added a bottle of wine and some candles, too. But that would definitely have been way over the top.Cutting a skinny slice of cheesecake for her and a normal slice for Reese, Kat transferred them to dessert plates and carried them over to the table, where she
promptly put part two of her plan into action. Under the guise of setting one of the plates down on the table in front of Reese, she bent over so that her breasts were right in front of his face.

Reese gazed at her breasts for so long that for a moment Kat was tempted to stay in that position just to see if he would reach up and cup them in his hands. But then she reminded herself that she was supposed to be subtle. Standing up, she gave him a smile.“Ooops,” she said lightly. “Forgot the forks.”Extremely aware of Reese’s eyes on her, Kat turned and walked across the kitchen, making sure to put a little extra sway in her hips as she did. Opening the cutlery drawer, she took out two forks, only to drop one as she closed it again. It fell to the floor with a clatter.Muttering something about how clumsy she was, Kat bent over to pick up the fork. She kept her movements slow and deliberate as she picked up the utensil, giving Reese a good, long look at her shapely legs and heart-shaped derriere. After a moment, she straightened and tossed the dirty fork in the sink, then grabbed a clean one from the drawer.Going back over to the table, she handed Reese a fork and sat down. Though he made no comment, she could see that her little act had put him off balance. Good, she thought.Using her fork to cut into the slice of cheesecake, she waited for Reese to glance at her before slowly lifting it to her mouth.

“Mmmmm…” she moaned as she chewed. “This is absolutely delicious.”

Across from her, Reese stared at her, his fork halfway to his mouth, his dark eyes full of desire. He wanted her, Kat thought smugly. Her lips curving into a smile, she lifted another bite of cheesecake to her mouth, keeping her eyes on Reese as he watched her slowly lick the creamy dessert from the fork. Another bite or two of cheesecake and she’d have him, she told herself, almost giggling when she saw how much effort he was having to put into concentrating on his own dessert.

When they had been dating, she and Reese more often than not would have gone straight to bed and made love after having dinner, but tonight they both ended up in the living room watching television. Though he sat on one end of the couch and she was curled up on the other, Kat was extremely aware of the glances he sent her way when he thought she wasn’t looking.

As she sat there pretending to watch TV, Kat found herself imagining Reese picking up in his arms, carrying into the bedroom, and making mad, passionate love to her. In fact, her fantasy was so vivid that when he announced he had an early day the following morning and that they’d better get to bed, she found herself waiting for him do exactly that. But instead, all he said was, “You can have the bed. I’ll take the couch.”Kat looked up at him in surprise. “Don’t be silly. Your bed is certainly big enough for two, and it’s not like we haven’t slept together before.” She gave him a grin. “I won’t even try to steal the blankets.”

Reese’s mouth quirked. “All the same, I’ll sleep out here.”

Resisting the urge to try and change his mind, Kat forced herself to shrug. “Suit yourself,” she said, uncurling her legs from the couch and getting to her feet. “Good night.”

Without waiting for a reply, she turned and walked out of the living room to pad barefoot down the hallway and into the bedroom. Closing the door, she leaned back against it, her mind awhirl as she tried to come up with a new plan.Kat had really thought that Reese would have admitted defeat after the cheesecake, and if not then, surely by the time they went to bed. What the heck was she supposed to do now? She wasn’t sure how long she’d stood there, waiting for an idea to come to her, but when one finally did, it was like a light bulb had gone on. Of course, she thought excitedly. Stripping off her shorts, she tossed them onto the bed, and then, wearing only her cami-top and a pair of tiny bikini panties, she walked out of the bedroom and into the living room. Ignoring Reese, she walked right past the couch and into the kitchen. Taking out a glass, she poured herself some water and stood in the light of the open refrigerator while she drank it. She knew that the glow would silhouette
her half-naked body to great effect. She also knew that from his position on the couch, Reese could see her perfectly.

Putting the glass in the sink, she walked back into the living room, giving Reese an apologetic look. “Sorry,” she said. “I just had to have some water before I went to bed.”

He made no comment, but just watched as she walked past. Back in the bedroom, Kat waited for a few moments before carrying out the next part of her plan. She would have to time it perfectly or it would definitely look like she was up to something. She knew she should probably have waited at least five minutes, but couldn’t hold out that long. Opening the bedroom door, she crossed to the linen closet. Taking out the extra blanket she knew Reese always kept in there, she hugged it to her chest and padded down the hallway to the living room.

Reese was lying on the couch, staring up at the ceiling, his arms folded behind his head, and he looked up at her entrance. His gaze ran over her bare legs before it met her own. “What are you still doing up?” he asked.

She offered him a small smile. “I just realized as I was getting ready to jump into bed that you didn’t have a blanket out here,” she said. “I thought you might be cold and I figured that since you were nice enough to let me use the bed, I could at least bring you a blanket.”

He frowned slightly. “You can just leave it on the chair,” he said. “I’ll get it if I need it.”

Ignoring his words, Kat walked past the stuffed chair and over to the couch, unfolding the big fleece blanket as she went.

“It’ll just take me a second to put it on,” she started to say, and then let out a gasp of surprise as she purposely tripped on the hem of the blanket to go sprawling across his chest. Reese’s arms went around her automatically to keep her from falling off the couch, which was a good thing because somehow she really had gotten all tangled up in the blanket.

“Oh, I’m so sorry about that,” she said breathlessly. But she really wasn’t sorry at all. Her well-timed trip had worked out just like she’d hoped. It not only brought her nose to nose with him at the perfect angle for kissing, but it pressed her soft breasts against his muscular chest as well, and it was all she could do not to moan when she felt his hard cock, insistent and urgent against her. Though she tried to resist the urge to move against him, her hips seemed to have a mind of their own and she found herself rubbing against his hardness.

“Okay, that’s it!” Reese growled.Faster than she would have thought possible, Reese threw the blanket aside and had her back on her feet and over his knee. Remembering what had happened the last time she was in that position, Kat frantically tried to push herself upright, but a firm hand on her back pushed her down again.

“Reese, don’t you dare…” she began, only to let out a loud yelp when he delivered a sharp smack to the seat of her panties. She couldn’t believe he was actually spanking her! Again!

Read another sexy excerpt!
Buy Now!
And don’t forget to stop by next Wednesday for my vision of the hunky Reese Huntley!
*hugs*
Previous Post TwoLips Reviews give Cindra and the Bounty Hunter 4.5 Kisses! Next Post Thursday Thirteen!