Got my cover for SEXY SECRET SANTA! I think it captures the sexy, playful feel of the story, and I really like the way they’re gazing into each other’s eyes! Syneca, the artist who does my Ellora’s Cave covers, always does amazing work! 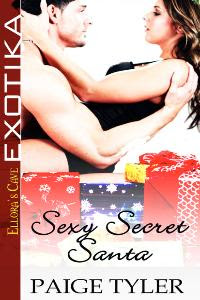 Christmas came a bit early for you, Paige. Congrats on the wonderful cover!

And, I agree, Syneca is a cover goddess!