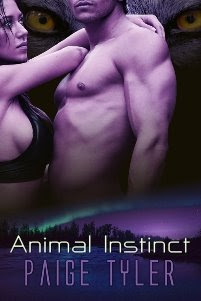 Every Girl Wants a Guy Who’s an Animal in Bed!
Artist Heidi Gibson is spending the summer up in Anchorage doing some painting when she gets attacked by a crazed wolf. She is rescued by golden- eyed wildlife biologist Luke McCall, who calmly informs she has been bitten by a werewolf and will turn into one during the next full moon. Thinking he’s obviously out of his mind, she can’t get away from him fast enough.
When strange things start happening to her, however, she begins to think the ruggedly handsome biologist could be right. Not knowing what else to do, she goes to Luke and is stunned to discover that he knows so much about werewolves because he’s one himself.
As Luke teaches her what she needs to know about being a werewolf, Heidi finds herself falling hard for the Alaskan hunk. But while they’re intent on each other, the werewolf that attacked her comes back into the picture, and he’s not exactly happy that another of his kind is trying to take the woman he believes is his rightful mate. Can Luke and Heidi’s attraction overpower the jealousy of the rogue werewolf?
Available in June from Whiskey Creek Press Torrid!
And for info on Animal Attraction, the first book in the series, visit my website at https://www.paigetylertheauthor.com
*hugs*
Previous Post Tasty Tuesday! Next Post Thursday Thirteen!

Hey, if you’re putting ebook review copies out into the world, I review at LibraryThing and Fang-tastic Books…

Paige, I’m moving this book up on my to be read list! Grrrrr….

Chris – Glad you like it! I’ll keep that in mind!

Christie – Yay! I’m so glad! Thanks so much! I’m flattered! You’ll have to let me know how you like it!

Mary – Yay! I’m so flattered! Thanks, so much! You’ll have to let mw know how you like it!