Combining Two of My Favorite Things! 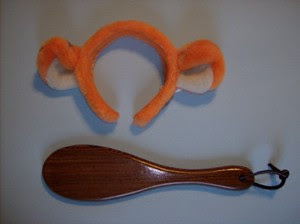 A comment from Tiggs, one of my readers, got me thinking about a spanking my hubby gave me at Disney World a little while ago, so I thought I’d share it with everyone. Okay, it was actually in the hotel, not one of the parks, but since it was a Disney hotel, it counts as a spanking at Disney in my book! It also combines two of my favorite things – Disney and spanking!
Since we were in the hotel, though, we had to be careful not to make too much noise. Of course, I told my hubby that if he had gotten some of those big, soft Mickey hands they sell in the park, he could have worn those while he spanked me, instead of using the wood paddle we brought with us. After all, they’d be less noisy! He chuckled and pointed out that while they definitely would be a lot less noisy, they wouldn’t have nearly as much of a sting. I had to agree that he did have a point!
Since we were at Disney, I thought it’d be cute if I wore my Tigger ears for my spanking, so I promptly put them on and stretched out over my hubby’s lap on the bed. He started with a nice, slow warm-up with his hand, spending lots of time rubbing and caressing my bare bottom in between, which I absolutely love!
After awhile, he picked up the paddle. But instead of spanking me right away, he rubbed my bottom over and over with the smooth wood, which got me very relaxed. Of course, my hubby chose that moment to start spanking me! The first smack made me jump, and I had to try really hard to keep from yelping! It’s not that my hubby spanks me all that hard ever, or at least not any harder than I like (*grin*), but that wood paddle, which is about 1/2 inch thick and made of heavy wood, is the “thuddy” kind of paddle, not the “stingy” kind, and for some reason, it just seems to hurt more. Plus, I’m always very vocal when I get spanked! Even so, I didn’t want him to stop, and soon, I was squirming and kicking all over his lap, while still managing to keep the squealing to a minimum!
But though my bottom colors quickly from a spanking, the rosy glow from the paddle had already faded by the time we left the hotel for the Disney Marketplace that evening!
By the way, in case you were wondering where we got that paddle, we picked it up in the Babeland store when we were out in Seattle. I don’t know if they have that particular paddle online, but you can check at Babeland.
*hugs*
Previous Post Spanking in Mainstream Romance! Next Post Life Imitates Art!

ha… getting spanked wearing Tigger ears paints a very vivid mental picture. Those thick wood paddles do pack quite a punch too! A tough implement to use in a hotel, but that doesn’t seem to stop spankos from trying! Great post, thanks for sharing.

Todd & Suzy – You’re so right about those thick wood paddles! Boy, do they pack a wallop! And, yes, they are kind of difficult to use in a hotel room. Though I think my hubby’s more concerned about the squeals I make while I’m getting spanked! *grin*

Carye – Thanks! Glad you enjoyed reading it!