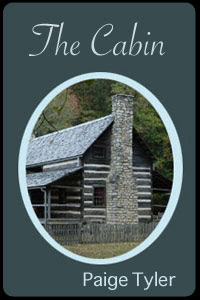 Here’s a never before released excerpt from my bestselling contemporary spanking romance The Cabin!

Raine awoke the next day to find herself alone in the cabin. She lay where she was for a moment, wondering if she’d dreamed up everything that had happened the night before. But as vivid images of being put over Logan’s knee and spanked came flooding back to her, she realized that she hadn’t been dreaming at all, and a fresh rush of color stained her cheeks. That bastard! she thought. If he thought she was going to put up with that, he was so wrong.

Her gaze going to the bathroom door, she listened, but didn’t hear any sound of movement inside. Perhaps he was in his studio, she thought. She listened again, but there was no sound from that room either. Maybe he was out chopping wood or something, she thought. She hoped. Because she didn’t want to see him before she left. And she was leaving, snow or no snow.

Throwing aside the blankets, she stood up and hurried to the bathroom, grabbing her bag on the way. Quickly taking off her pajamas, she pulled on her jeans and T-shirt. Though they weren’t exactly warm, they were the best she had, and with the pair of sneakers she’d luckily thought to bring with her, they were better than nothing.

Opening the door a crack, she listened to see if Logan had returned, but heard nothing except the sound of the fire crackling. Her bag in one hand, she hurried into the living room. Grabbing her jean jacket, she shrugged into it, then threw her purse and overnight bag over her shoulder. She was just heading for the door when it swung open and Logan walked in. She stared at him for a moment, and then pushed past him to reach for the doorknob.

“Where are you going?” he asked.

She swung open the door before turning to look at him. If it had been a movie, she thought, the effect would have been dramatic, but in reality, all it did was let in a gust of frigid air that made her shiver. “I’m leaving,” she told him coldly.

He snorted. “I’m not taking you anywhere until the roads are clearer.”

He stared at her incredulously. “Are you insane? The nearest town is five miles away. It’s a blizzard out there.”
Her hand tightened on the doorknob. “I don’t care!” she snapped.
“Anything’s better than staying here with you!”

Not waiting to see what effect her words had, Raine stepped out onto the front porch and slammed the door behind her, which took some doing, considering how much wind there was. Almost immediately, however, she regretted her decision. It was snowing even harder than it had been the night before, and the clothes she had on offered no more protection than the skirt had. Knowing that she couldn’t go back inside after such a dramatic exit, however, Raine drew her coat tight about herself, hiked her bag up higher on her shoulder and started away from the cabin.

Logan stood staring at the door in disbelief. No one in their right mind would go out in a snowstorm like the one they were having, he thought, especially when they weren’t even dressed for it. The little fool was going to freeze to death. But if she were stupid enough to try to walk to town when there was a perfectly warm cabin right here, he told himself harshly, then she deserved to freeze. Which was unlikely, of course. He’d bet she’d be back in five minutes. He’d doubt she’d even make it to the end of the driveway before she came back.

Shrugging out of his coat, he hung it on the peg beside the door. The idiot woman was going out in a blizzard wearing jeans and a light jacket just because he had spanked her last night. It was obvious that everyone in Hollywood let her get away with her obnoxious behavior. But there was no way he was going to put up with it, even if she threw a tantrum by going out in the snow.

Walking into the kitchen, he checked the coffee to see if it was done. He waited a few minutes for the last of it to drip into the pot, then poured some into a mug and sipped it while he waited. The silly girl probably didn’t even know where the town was, even if she could walk five miles. She’d be back any minute now. But five minutes turned into ten, and still Raine hadn’t come back. Of its own accord, his gaze went to the unused mug he had set out for Raine, and his hand tightened around his own cup. Dammit!

Setting down the mug, he strode into the living room and grabbed his coat from the peg where he’d hung it. Slipping into it, he jerked open the door and went outside. Raine’s slim figure was nowhere in sight in the falling snow. She must be able to walk faster than he’d given her credit for. Swearing under his breath, he walked over to his Jeep, climbed inside and cranked the engine. He just prayed that she wasn’t dumb enough to stray from the road.

If you’d like to read more about The Cabin, including another sexy excerpt, click here!
Or, if you’d like to go ahead and purchase The Cabin, click here!
And don’t forget to check back next Wednesday for my vision of the hunky Logan McBride!
*hugs*
Previous Post Enchanting Reviews Gives Cindra and the Bounty Hunter 5 Enchantments! Next Post Thursday Thirteen!

Ms. Raine has a hot little temper! I can’t wait to find out how much trouble it lands her in! lol!

Great excerpt. I loved this book!

~Heather – LOL! Yes, she does! And it gets her into lots of trouble! *grin*

Kelley – Thanks! I’m glad you liked it!