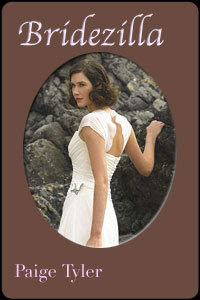 Here’s an excerpt from my bestselling contemporary spanking romance Bridezilla!

Travis’s mouth quirked as he pulled out of the driveway. He still didn’t know what had prompted him to spank his fiancee the night before. He’d never done anything like that in his life. But he’d just been so frustrated with Chloe that before he’d even realized what he was doing, he had reached out and dragged her over his knee. Whatever his reason, though, the spanking had clearly had the desired effect. And he had to admit that watching his girlfriend wiggle and squirm around on his lap while he smacked her sexy, little ass had been rather fun. In fact, it was all he could do not to pick her up in his arms and carry her upstairs to bed.Thoughts like that kept him company all morning at work, and he ended up having a constant hard-on. A little while after lunch, Travis’ cell phone rang. Thinking it was Chloe with the first emergency of the day, he was surprised to hear her maid-of-honor’s voice on the other end of the line instead.

“Travis, it’s Kate,” the girl said. “I need help. I’m at the bridal shop with Chloe, and she’s having a total meltdown! Not only does she hate the bridesmaids’ dresses and want to change them, but she’s also complaining about the way her gown fits, too. It looks just fine on her, but she won’t believe anybody. The dressmaker is about to throw us all out, and if Chloe doesn’t stop harassing all of the bridesmaids, she’ll be lucky if she even has a wedding party after today.” She paused, and he could hear the sounds of raised voices in the background, Chloe’s among them. “Can you come over and talk to her? Please?”

Travis’ jaw tightened. Just that morning Chloe had promised him that she would relax and enjoy herself, and already she was freaking out again. Kate wanted him to talk to her. Oh, he’d talk to her all right, he thought. While he was tanning her bottom!

“I’ll be there in ten minutes,” he told Kate. “Keep everything under control until I do.”

Saving the changes he’d made to the landscape design he’d been working on, Travis let the secretary know he’d be out of the office for awhile, and then left. Since both the design firm where he worked and the bridal shop were in downtown Monterey, it was a short drive, but by the time he got there, it was to find Chloe’s bridesmaids already piling into their cars outside, and the dressmaker storming out of the fitting room in a huff.

The woman stopped in her tracks. “The fiancé?” she asked, looking up at him.

Muttering something under her breath that sounded like “Thank God!” she jerked her head toward the fitting room she’d just left and kept on walking. Clenching his jaw, Travis determinedly strode across the room and into the fitting room.

Chloe was alone with her maid-of-honor, and from the look of relief on Kate O’Donnell’s face, he’d gotten there just in time. His girlfriend was just putting on a sundress, and she whirled around, her blue eyes going wide in surprise.

“H-honey!” she stammered. “What are you doing here?”

He folded his arms across his chest and fixed her with a stern look. “Kate called me,” he told her. “She said that you don’t like the bridesmaid’s dresses and want to change them. Don’t you think it’s a little late to be making changes like that?”

Chloe threw her friend an annoyed look. “The color is just all wrong,” she said. “I mean, I always liked that idea of a black-and-white wedding, but now I’m thinking that a more traditional color would be better. I don’t know what the big deal is!””Chloe, you can’t just expect all of us to buy another dress!” Kate protested. “We’ve already spent a fortune on the ones we have.”

Chloe put her hands on her hips and lifted her chin, but Travis cut in before she could say anything. “We talked about this, Chloe,” he said, his voice firm. “You promised me that you weren’t going to stress out about the wedding anymore.”

“I’m not stressing out!” she told him. “I just want my bridesmaids to wear a different dress. They’re the ones that got all stressed out. And on top of all that, Carlotta didn’t take my gown in enough, and now it looks terrible!”

“Chloe, you’re being crazy,” Kate said. “It looks beautiful on you.”

Chloe gave him an aggravated look. “What would you know?” she snapped. “You don’t know the first things about wedding dresses!”

He frowned. “What’s gotten into you?” he demanded.

“Gotten into me?” she said sharply. “It’s not me, it’s all of you! It’s like you’re all conspiring to ruin my wedding. I just want everything to be perfect, and it seems like everyone around me just wants to put the least amount of effort into it.”

Travis clenched his jaw. This had gone on long enough, he thought. “I guess I didn’t spank you hard enough last night, did I?” he growled.

At the softly spoken words, Chloe felt her face color. Her gaze immediately darted to her friend to see if the other girl had heard, but from the way Kate’s green eyes had gone wide, it was obvious that she had. Before Chloe could even begin to try to explain Travis’ words, however, her boyfriend had closed the distance between them and taken hold of her arm.

“Honey, what are you doing?” she squeaked as he marched her over to one of the fitting room’s two straight-backed chairs.

“What do you think?” he returned.

She pulled against his hold, but it did no good, and within a couple of steps, he had her across the room. In the mirror, she caught sight of Kate looking at them with an amused expression. Getting another spanking was bad enough, but getting one in front of Kate would be mortifying!

Travis turned to face her, a determined expression on his handsome face. “Why not?” he said. “If you’ve been half as bratty with her these past couple of weeks as you have with me, I’d say she’s entitled to a front row seat.”

Chloe was aghast that Travis could even be thinking of spanking her in front of their friend. “Honey!”

But her boyfriend had already taken a seat and was putting her over his
knee.

And don’t forget to stop by next Wednesday for my vision of the hunky Travis McAlister!