Available for PRE-ORDER! SOMETHING ABOUT A MAN IN UNIFORM – Military Menage Boxed Set!

So excited! SOMETHING ABOUT A MAN IN UNIFORM, My Military Menage Boxed Set is Now Available for Pre-Order at Amazon!  Get it today at this special price because it goes up after release day (Nov 11th)!

These four HOT books are all about girl meets hot guys in uniform and immediately falls in lust. And the Marine and Navy Menage Stories are interracial, my first in the subgenre! 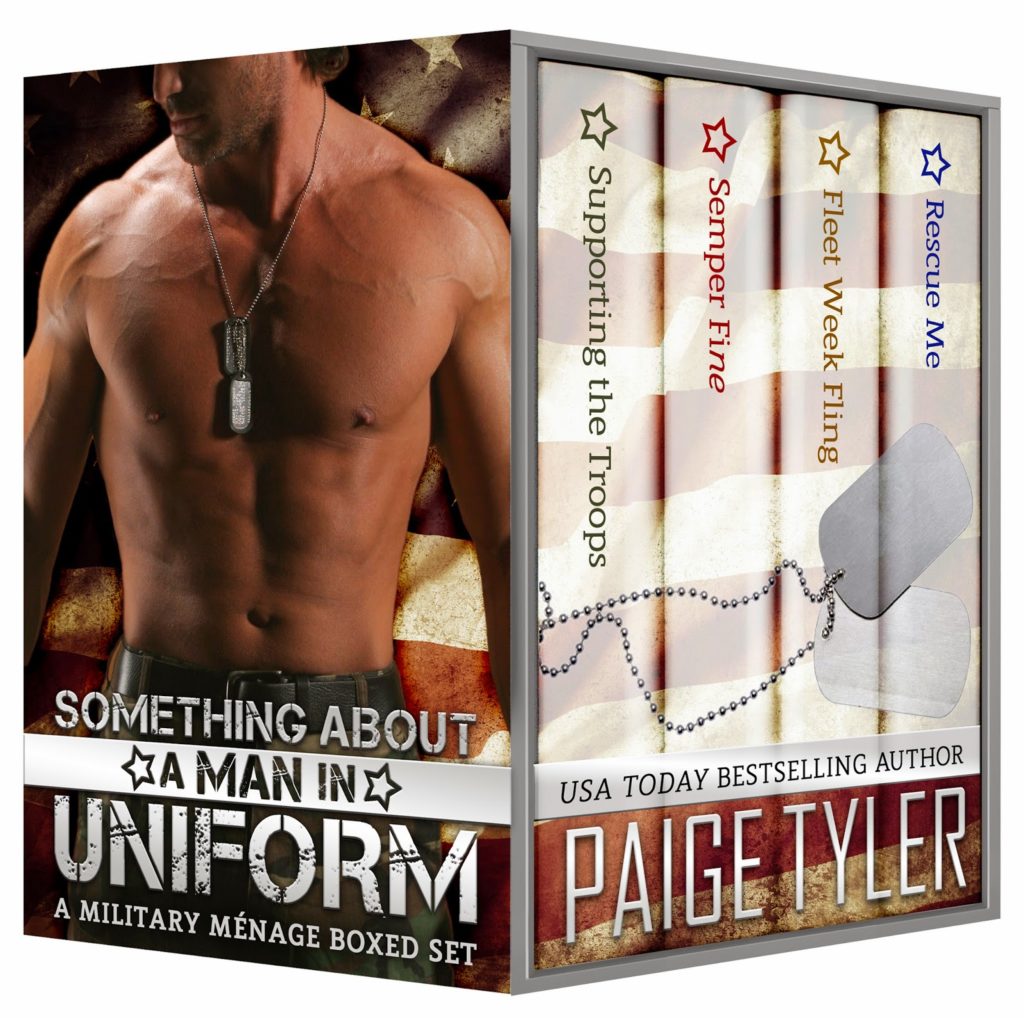 SUPPORTING THE TROOPS – an Army Ménage

Knowing she and her husband Dylan won’t be able to make love with his Army buddy, fellow Ranger Carter Erickson arriving the next day and staying with them for two weeks, Shelby Reynolds surprises Dylan by greeting him at the door naked when he comes home from work. Only Dylan isn’t alone. Carter came in a day early and gets an eyeful of her very nude body. While Shelby is embarrassed, she’s also extremely aroused. She loves Dylan like crazy and shouldn’t be fantasizing about other men, especially his best friend. As Shelby gives in to her inner exhibitionist, it turns out that Dylan is just as turned on by the idea of a threesome as she is. After all, if a guy can’t share his wife with his best friend, who can he share her with?

Delaney Shaw is stunned to discover that her high school crush Colt Baxter is the best man at a wedding where she’s the maid of honor. Too shy to ever come on to him back then, she doesn’t intend to make the same mistake now. There’s only one problem. She’s just as attracted to his friend and fellow Marine, Jagger Cruz. Not wanting to come between them, Delaney decides not to make a play for either one. But when it turns out that in between them is exactly where Colt and Jagger want her, she gives in to her desire to be the center of a hunky Marine sandwich.

RESCUE ME – an Air Force Ménage

When Kayleigh Ellis gets stranded in a ditch on the side of the road during a storm, she’s sure that she and her cat are in deep trouble. But luckily Air Force Pararescue Jumpers Austin Fuller and Kyle Larsen show up just in time, giving her and her cat a ride home. Wanting to thank them for their help, Kayleigh invites them to stay for dinner. Austin and Kyle don’t want to put her to any trouble, but she insists. And while the dinner is fun, Austin and Kyle are more interested in dessert, particularly if Kayleigh is on the menu.