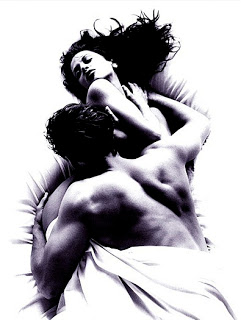 The Sexy Tale of Goldie and the Three Werebears.

When Goldie Lockwood gets lost while hiking in the woods and comes upon a cabin, she thinks nothing of doing a little breaking and entering. Little does she know the cabin belongs to three hot, hunky werebear brothers, who aren’t thrilled to discover she not only ate their food and broke one of their woodcarvings, but also slept in their beds. Not keen on the idea of going to jail for what she did, she suggests they instead punish her themselves by giving her a spanking. She hopes the youngest brother Gregory, with whom she already feels a spark, will volunteer for the job, but the men surprise her by announcing all three of them will be giving her a spanking.

Goldie has always secretly liked getting spanked, though, and ends up getting so hot she has sex with all three brothers at the same time. While the sex with all of them is amazing, she only feels a connection with Gregory. But as she drifts off in his arms after the wild night of sex is over, she can’t imagine how they can possibly have a relationship when she just had sex with him and his two brothers.

Then again, this is a fairy tale and they are known for their happily-ever-after’s.

Big Congrats! What a great way to start the new year;-)

Hi Paige. I'm so glad you're at EC! I've been there for a few months (newbie) and they are fantastic! I can't wait to read your upcoming books!!! Congrats!!!