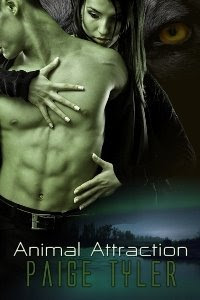 I played around with a lot of different storylines, but I kept coming back to the idea of werewolves. Wolves just seemed to fit so well into the Alaskan theme, so I decided to go for it. Once I did a little bit of research on Fairbanks, the story just started to write itself.

I thought it would be more fun for my heroine to be a skeptic, so I made her a reluctant reporter for a paranormal magazine. I figured that would lead to lots of amusing interaction with the hunky hero, who just happens to be a werewolf, of course! Take a look at the blurb and excerpt below, and you’ll see exactly what I’m talking about.

Synopsis:
Frustrated when none of the real newspapers will hire her as a reporter, Eliza Bradley takes the only job she can get – at a paranormal magazine. Her first assignment takes her to Fairbanks , Alaska to investigate the possibility that a werewolf has killed two local hikers.

Excerpt:
“Anything else I can get for you folks?” the waitress asked.
Eliza glanced down at the table before looking up at the waitress again. “Ketchup?”The woman nodded. “There’s a bottle on the table right behind you, sugar. Enjoy your dinner.”
Eliza had expected the woman to bring her a new bottle of ketchup, or at least grab the one off the other table for them, like waitresses in most restaurants would usually do. Maybe it was a diner thing, Eliza thought. Or an Alaska thing. Either way, it seemed she would be going to get her own bottle of ketchup.

Taking her napkin off her lap and placing it on the table, Eliza pushed back her chair and got to her feet. When the waitress had told her that there was a bottle of ketchup on the table behind theirs, she had naturally assumed it was unoccupied, so she was surprised to see a man sitting there. And not just the average, run-of-the-mill guy she’d expect to find in a diner either, but a mouth-watering specimen of a man. Her breath caught as she found herself stopping right there in the middle of the diner to stare at him She had read in Cosmo once that there was something different about Alaskan men, that living in the great white north made them more masculine and sexy. Staring at the man seated at the table, she could well believe it.

Thank goodness he was intent on whatever he was reading on the laptop in front of him, because he would surely think she was a freak standing there staring at him with her mouth hanging open. But good heavens, with that thick, dark hair, chiseled, hair-roughened jaw, and wide, sensual mouth, how could any woman not be mesmerized?

Abruptly realizing how idiotic she must look just standing there, Eliza finally forced her feet to move. As she neared his table, the man looked up from his laptop and she felt her breath hitch as his gaze met hers. She’d never seen eyes like his before. Not quite brown, but not really hazel, either, the only way she could think to describe them was gold. And the sexiest pair of eyes she’d ever seen. The heat from them mesmerized her, pulling her into their depths, and suddenly she found it very hard to breathe.

When he lifted a brow in question, she finally managed to break out of her trance. “I, um, was wondering if I could steal your ketchup,” Eliza stammered, her face coloring. “We don’t have any,” she added, glancing back at her table.
The man followed the direction of her gaze, his gold eyes settling on the photographer for a moment before he gave her a smile. “Sure.”
Picking up the bottle, he held it out to her. As she reached for it, her fingers brushed his and she almost gasped as the most amazing sensation swept through her. It was like she’d just gotten completely and thoroughly kissed. Her knees felt weak and there was a delicious little flutter in her tummy that left her breathless.
It was then that she realized she hadn’t actually taken the bottle of ketchup yet. She was just standing there touching him like a dufus. She tried to cover her bizarre behavior by grabbing the bottle, but all she did was almost knock it out of his hand. They both fumbled with the thing for a moment before she finally gained control of it.
Could she be any more lame? She could already feel the heat rushing to her face.

“I think your boyfriend’s waiting for the ketchup,” he said when she continued to just stand there.

Eliza’s brow furrowed in confusion at the word “boyfriend,” but then she realized he must be referring to the photographer. She forced her attention away from the pleasant warmth that still swirled between her thighs and gave him a smile. “Oh, you mean Andy. He’s not my boyfriend. We just work together.”

Oh God. Did he think she was trying to come on to him? Crap, she really needed to go back to her table before she did something else to embarrass herself. But she couldn’t seem to make her feet move. She had a crazy urge to reach out and touch him again to see if that same sexual spark would happen. Resisting the impulse, she instead reached up to tuck her long, dark hair behind her ear. “But you’re right. He is probably waiting for the ketchup.”
Giving the man another smile, she forced herself to turn and walk back to her table. Halfway there, however, she couldn’t resist glancing over her shoulder to take one more look at him. He was regarding her with those incredible golden eyes of his, and her pulse fluttered wildly at the intensity in his gaze.
What was going on with her? She’d never experienced anything like this in her life. She had to get control of herself. Giving him one more look over her shoulder, she turned and stumbled back to her seat in a daze, clutching the bottle of ketchup in her hand.

Across from her, Andy lifted a brow as if to ask, what the hell is wrong with you? When she didn’t say anything he prompted, “You just going to sit there and hold that all night or can I use the ketchup?”

She blinked. “What? Oh, yeah. Sorry,” she mumbled, handing it to him.

Eliza watched as the photographer dumped ketchup on his onion rings, and then began to dig into his meal. She knew she should be doing the same, but she couldn’t stop thinking about what had just happened. Her heart was still racing as if she’d just come back from a run. Or had just gotten done having some really great sex. Good heavens, and all of that was from a mere brush of the fingers. She couldn’t keep herself from wondering what it would have been like if he really had kissed her.

And to get the scoop on all my new releases, as well as what I’m currently working on, just email me at paigetyler@paigetylertheauthor.com with “add me to your mailing list” in the subject line!

Oh, and by the way, I’m already working on the sequel to Animal Attraction, so keep checking my website for details!