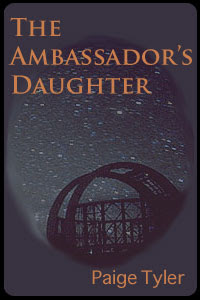 Here’s a never before released excerpt from my sci-fi spanking romance, The Ambassador’s Daughter!

After unpacking, which took less than thirty minutes, Rand took out his com and linked to the ambassador. Though he had nothing to report, he had told Chane Kal’yle that he would be checking in once a day while on the journey to Deuntaie. They talked for a little while, and the ambassador told him that he was still waiting for the holo-shots of the suspicious character at the Dark Side. He said he would get hold of Rand as soon as he had something. After closing the link, Rand decided to go looking for Inarii. They were posing as newlyweds; he supposed they should be seen together. Besides, he wouldn’t mind spending the afternoon gazing at those long, sexy legs of hers. And whatever else she was probably showing off by now, he thought wryly.

One of the decks on the deep-space cruiser had been made to simulate the topmost deck on the cruise ships of ancient earth, complete with a pool, deck chairs, even artificial sunlight and a fake breeze. You could even smell the salt air and hear the waves lapping against the nonexistent hull. The only things that were out of place were the small, noiseless robots that roamed around picking up scraps of garbage and delivering drinks.

His eyes shielded by sunglasses, Rand scanned the deck for Inarii, and swore softly when he found her. She was lying on one of the deck chairs beside the pool, openly flirting with some guy who was rubbing her down with sunscreen. Rand clenched his jaw as he watched the man’s hand linger on her thigh. So much for hiding in a cabana, he thought.

Swearing under his breath again, he strode over to where she lay sunning herself, but neither she nor the guy she’d been flirting with took any notice of him. Not even when he stood right beside them.

“I’ll take it from here,” Rand drawled. “I think I can get any spots you might have missed.”

Inarii jumped at the sound of his voice and looked up at him in surprise. Her companion, however, was not so easily startled.

“And just who the hell are you?” the man demanded.

At this point, he almost hoped that the man would make an issue of it. As mad as he was, he’d almost enjoy tossing the guy around for awhile. He was jealous, he realized in surprise.

But the man’s eyes only went wide, and he jumped to his feet, holding up his hands. “She didn’t tell me she was married.”

She flushed at the reference, barely able to look at the guy who’d she been flirting with only minutes before, instead shooting daggers at Rand.

Rand saw the man look from him to Inarii, and then back to him. “Look, dude, I’m not really into any of this. I gotta go.”

The man picked up his towel, threw Inarii a regretful look, and was gone before either she or Rand could say more. Which suited Rand fine. His expression hard, he glared down at her. “Let’s go.”
She ignored him and settled back in her chair, lifting her chin defiantly. “I can’t believe you said that! Do you get off on embarrassing me?”

He clenched his jaw. Damn, but she was infuriating. “I will not argue with you in public, Inarii. Now, let’s go.”

She looked like she was considering whether to defy him or not, but his tone brooked no argument, and Inarii seemed to know that. “Fine!” she snapped.

Muttering something else under her breath that he couldn’t hear, she got to her feet and grabbed up her bag. Before she could take two steps, however, Rand caught her arm, practically dragging her across the deck to one of the cabanas that lined the railing at the edge of the pool area, and half-pushed her inside.

“What the hell did you think you were doing out there?” he demanded, rounding on her the moment they were hidden behind the colorful canvas.

Inarii took off her sunglasses and hat and shook her hair out around her shoulders. It tumbled down her back like silk. “Absolutely nothing,” she said. “I needed some suntan lotion put on, and he was nice enough to do it.” She gave him an innocent look. “What? Is our marriage on the rocks already? Or are you just jealous?”

Rand ignored the jab, watching as she took out her hairbrush and began to run it through her tresses. “And what if that guy had recognized you?”

She wrinkled her nose. “I don’t think even my mother would recognize me in that hat. And besides, he wasn’t really looking at my face.” With a coy smile, she half-turned and twitched her curvy bottom at him.

“Very funny,” he said. “In case you haven’t noticed, we’re trying to look like we’re married, and having some guy rub lotion all over you doesn’t exactly give credibility to that, does it?”

She smirked. “I don’t think credibility is what we’re talking about. I think you’re just jealous.”

“I’m not jealous!” he snapped. “I’m your bodyguard, not your boyfriend. My only concern is your safety.”

She spun around to look at him, her eyes flashing angrily. Even in a skimpy bikini, she somehow managed to still look the part of a snooty debutante. “Look, I wore that ridiculous hat like you asked. I even put on a slight Candoshen accent, so that no one would recognize my voice. I’m trying to go along with this stupid plan of yours, but don’t for a minute think that you’re the boss of me, Rand Barany. And you’re certainly not my husband. I do as I please, so, if I want to have every guy on this ship rub lotion on me while I sit beside the pool, then I will, and there’s not a thing you can do about it!”

Anger, mixed with a good dose of jealousy, surged through Rand then. “We’ll see about that,” he growled.

He knew he shouldn’t spank her right there, but she was just begging for it. Yanking the hairbrush out of her hand, Rand took hold of her arm and started for one of the lounge chairs.

He was going to spank her again, she realized, and to her surprise, Inarii felt her pulse skip a beat. “You…you can’t!” she protested. “Not right here. Someone could hear.”

The cabana was three-sided, so if anyone heard anything, they would certainly come looking. Which would serve her right, Rand thought, his mouth quirking in amusement. “Then you’ll have to be quiet, won’t you?”

Her eyes went wide, but before she could do more than gasp, he sat down on the bench and dragged her over his knee. She held her breath, waiting, and then let out a little gasp of surprise when she felt his hand on the waistband of her bikini bottom. Nothing more than a small triangle of material to begin with, it did little to cover her cheeks, but Rand must have thought it was in the way, because he tugged it down to mid-thigh, leaving her bottom bare and vulnerable.

She felt herself blush. The cabana faced away from the pool so that its occupants could have privacy as well as a view of the ocean on the enormous holo-screen that lined the deck. If anyone came by… “Wait…” she began, only to feel the smooth wood of the hairbrush smack against her right cheek.

If you’d like to find out more about The Ambassador’s Daughter, as well as read another sexy excerpt, click here!

And don’t forget to check back next Wednesday for my vision of the hot bodyguard, Rand Barany!

Tempest and Kallisto – Thanks! Glad you enjoyed it! Inarii and Rand are one of my favorite couples!