All She Can Think About! – Paige Tyler – New York Times and USA Today Bestselling Author

All She Can Think About! 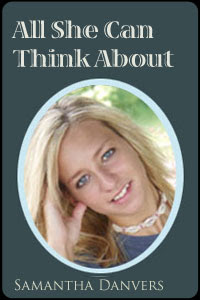 Here’s an excerpt from my spanking romance All She Can Think About, written under the name Samantha Danvers!

Bree put her plan into motion that evening. Despite the chilly fall temperatures, she took Angie’s advice and put on the shortest miniskirt she had. Barely coming to mid-thigh, she paired it with a curve-hugging sweater and knee-high leather boots. Looking at her reflection in the mirror, she had to admit that the effect was pretty darn sexy.

Apparently, her boyfriend must have thought so, too, if the smoldering look he gave her when she walked in the door was any indication. And if Ronan wondered why she was so dressed up for a simple study-date, he didn’t mention it.

But neither did he take the hint and give Bree that spanking she was angling for, either, much to her dismay. And she did everything that she and Angie had talked about, too, including rubbing her ass against Ronan’s groin whenever the opportunity presented itself.It wasn’t that Ronan was oblivious, or
immune to her. Far from it, in fact. Whenever she bent over, his gaze immediately went to her bottom, and when he finally growled that she was a “bad girl” for getting him all hard by rubbing up against him, she thought that her plan had worked for sure when he picked her up in his arms and carried her into the bedroom. And though they made wild, passionate love, Ronan didn’t even come close to spanking her.

When she told Angie about what had happened as they were getting ready for class the next day, the other girl frowned.

“And he didn’t even give you a playful smack when you bent over in front of him?” she asked. “Jack always does that.”

“Well, all Ronan did was drag me off to bed!” Bree said sullenly. “I mean, not that I’m complaining, but I wanted him to spank me first.”

Actually, a spanking before, during, and after their lovemaking would have been fine with her, Bree thought. And though it was probably unfair to expect Ronan to read her mind about the whole thing, she thought she would die of embarrassment if she had to come out and actually talk to him about it. All she could think about was Ronan looking at her like she was a freak.

Swinging her purse onto her shoulder, Bree picked up her books from the kitchen table. “What do you think about leaving some spanking stories out where Ronan can see them?” she asked her college roommate. “If I do it here instead of at his place, then he’s bound to see them.”

Angie smiled as she took her keys out of her purse. “And when he asks about them, you can shyly give him a coy look and let nature take its course.”

The blond girl gave Bree a shrug. “Contrary to what we might wish, guys are not into subtle, but it could work,” she said as she picked up her own books.It had better work, Bree thought as she printed out one of her more favorite spanking stories that evening. Ronan would be there any minute, and she wanted to make sure that the story was in a prominent place so that he would be sure to see it before they started studying. Bree was just placing it on top of her math book when the doorbell rang. Her pulse skipping a beat, she glanced at the computer monitor, wondering if she should leave the spanking website that she’d been looking at up on the screen. Deciding that it certainly couldn’t hurt, she hurried over to the door. Opening it, she gave her boyfriend a smile as she went up on tiptoe to give him a kiss.

Ronan kissed her back, his mouth warm and insistent as it covered hers, and she let out a soft moan of pleasure. When he finally lifted his head, he stepped back to let his gaze run over her appreciatively. She had dressed in her shortest pair of terrycloth shorts and a curve-hugging cami-top for their “study-date,” and couldn’t help but blush a little when her boyfriend let out a low whistle.

“There is absolutely no way that I’m going to be able to keep my mind on homework, you know that, don’t you, babe?” he said, his voice husky.

Bree certainly hoped so! Laughing, she evaded him when he would have reached for her again to hurry across the room. “Well, you’re just going to have to try, because there’s no nookie until it’s done,” she told him as she sat down at the kitchen table.

Ronan gave her a wolfish grin. “Good thing for me that I don’t have much to do, then,” he said as he crossed the living room.

“Good thing,” she agreed with a laugh. “Hey, honey, can you grab my math book for me? I think I left it over by the computer.”

Bree said the words casually, but inside, her heart was pounding wildly as Ronan walked over to the computer. Holding his own book in one hand, he reached for hers with the other, and she held her breath as she watched him pick up the piece of paper she’d left sitting out on top of it. This was it! she thought excitedly. In a minute, Ronan would turn to look at her, his brow lifted in question.

She, of course, would immediately jump up to run into the living room and blushingly snatch the paper from his hand. “Y-you weren’t s-supposed to see that,” she would tell him, stammering in her embarrassment.

She would chew on her lower lip and look up at him from beneath lowered lashes, and he would ask, perhaps even demand, to know why she had been reading
something like that. After some hesitation, she would shyly admit her secret desire to be spanked, of course. Then, her boyfriend would tell her that she was a very naughty girl for hiding something like that from him and that she did indeed deserve a spanking. She was practically bouncing in her chair, she was so excited by the thought!

If you’d like to read more about All She Can Think About, including another excerpt, click here!
Or, if you’d like to go ahead and purchase All She Can Think About, click here!
And don’t forget to check back next Wednesday for my vision of the hunky college senior Ronan Davenport!
*hugs*
Previous Post Thursday Thirteen! Next Post Thursday Thirteen!

What a tease you are! lol! Can’t wait to read!

~Heather – I so am! You’ll have to let me know what you think!

Ali – Yup, she is! And there’s more in the rest of the book where that came from!