A Sneak Peek at TEXAS SEAL!

As promised, a sneak peek at TEXAS SEAL, releasing tomorrow! 🙂 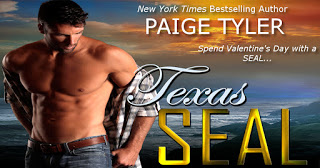 “So, what are your plans now that we know Marco is safe? Well, alive, at least,” she asked. “Will you be heading back to San Diego in the morning?”

A smile slowly spread across his face. “You that eager to get rid of me? What, do I snore or something?”

She laughed. “No. I just figured since there wasn’t anything keeping you here, you’d want to head home.”

His gaze swirled with sudden heat, making her stomach do that silly quivering thing again. “I wouldn’t say there’s nothing keeping me here. Besides, I have two weeks’ worth of leave to burn so it’s not like I have to rush back.”

Lyla tried to play it cool, though, with the way he was looking at her, she couldn’t keep her heart from beating a little bit faster. “Yeah, no need to rush back, I guess. If you have to take leave anyway. You could spend some time with your family since you’re here. Maybe take in a San Antonio Missions baseball game.”

“Or I could just hang out with you, making up for lost time,” he murmured, sending her heart rate skyrocketing. Trent leaned in a little closer as he spoke, looking way hotter than any man had a right to.

She wet her lips.

“Yeah, you could do that, too,” she said softly.

Lyla didn’t expect this thing between them—whatever it was—to go anywhere. She couldn’t deny she was very attracted to Trent, and she got the idea he was into her, too. If he ended up staying here for two weeks while on leave, she had no doubt it would be fun, with a good portion of that time likely spent wearing very little or no clothing. But it wouldn’t go beyond that. She wasn’t the kind of woman who could do the long-distance relationship thing.

“Unless…” Trent added, leaning in a little more.

Would it be too forward of her to grab him by the shirt and yanked him in for a kiss? Probably. Not that she’d ever do it anyway. She didn’t have the nerve to pull something like that off. The thought was nice, though.

“Unless you really need your futon back,” he finished, moving another inch closer but still keeping his distance. Like he was waiting for her to make a move.

“No,” she said, licking her lips. “My futon is yours as long as you’d like to use it. Unless…”

Now it was his turn to be taken by surprise, something Lyla enjoyed seeing more than she would have imagined. “Unless…what?” he asked, a playful smile tugging at his lips as he moved closer still.

“Unless you can think of someplace else you’d like to sleep,” she told him, leaning in this time, hoping he’d take the hint.

He did, his lips so close to hers she could feel his warm breath on her face. “I can definitely think of someplace else I’d like to sleep.”

Lyla was about to ask him to elaborate, but his mouth came down on hers…

Previous Post I’m Up for Best Author of 2016 and I’d Love Your Vote! Next Post Happy Valentine’s Day!