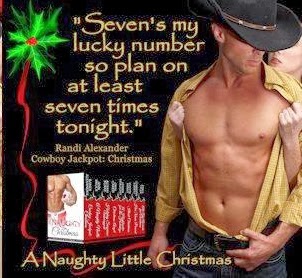 From Cowboy Jackpot: Christmas by Randi Alexander
Running her hands slowly up his arms, Gigi sighed. “I want to fool
around.”
Boone tipped his head back and laughed like a kid. “You’re the
best Christmas gift I’ve ever gotten.” Against the backdrop of the suite’s
windows, he reminded her of a package all wrapped in lights.
His hands slid to her butt and he tugged her up.
Holding on to his shoulders, Gieselle balanced herself and wrapped her
legs around him. She loved it when he carried her.
“You don’t have to ask this cowboy more than once.” He strode
to the bedroom, bent over the bed, and laid her back on it. Lit only by the
lights of the strip, the room wrapped around them, romantic and cozy.
Propping his elbows at her side, his face hovered inches from hers, his
breath warm on her skin. “Baby, I’ve got plans for you.”
A hot shiver skittered through her. “Plans?”
“Mm hm.” His eyes darkened and his breath came faster. “
She unbuttoned one button of his shirt. “What kind of plans?”
He reached behind his back, tugged off her shoe, and tossed it.
“Wicked ones.”
Flicking open another button, she asked, “Hot plans?”
“Yeah. And sticky.” He took her other shoe and threw it, too.
Opening the rest of his buttons, her mouth watered for a lick of his
nice pecs. “God, you’re sexy.”
“Baby.” It came out on a growl and he ripped off his cowboy
hat and threw it onto a chair. “You’re making me crazy.”
She tugged his shirttails from his jeans. “I want to make you
naked.”
With incredible speed, he removed his shirt and leaned back over her.
“Your turn.” He slid his hands from her knees down her thighs, his
fingers tracing the elastic of her panties around her hips.
The rough calluses on his warm hands rattled lusty heat along her skin
and down to her pussy.
Boone gathered her dress under her butt and sat her up, pulling it from
under her and up over her head.
He froze, his eyes on her see-through lavender bra. “Oh,
jeez.”
His stare puckered her nipples and tingled chills across her breasts.
Gieselle laced her fingers through his hat hair, releasing the blond mop. The
softness on her fingers tugged at her heart. A rugged cowboy with the sweet
personality of a gentleman.
Boone’s mouth covered hers as he laid her back on the bed. He wrapped
his arms around her, holding on tight. His big prize buckle chilled her belly.
She traced his lips with her tongue and he dove in, his tongue on hers,
on her cheeks, tickling the roof of her mouth.
His overpowering strength did fuzzy things to her brain and wild,
jittery things to her core. Her hips made tiny circles, cradling his hard shaft
through his jeans.
“Gigi.” He whispered against her lips as his hips took up the
rhythm of hers.
She scraped her nails lightly down his back. “Boone?”
“When you do that…” His mouth pressed hard and hot on her
neck, his teeth nipping, his tongue tracing patterns. Slowly he eased his body
lower, dragging his mouth along her skin, tasting as he went.
She closed her eyes and tipped her head back, thrusting her breasts
closer to him as desire swirled and puddled low in her belly.
His mouth traced the line of her bra across one breast, then the other.
“You’re so hot. Your skin is burning my lips.”
“Don’t stop.” Her blood raced through her like solar flares.
“No, ma’am.”
********
Randi Alexander
“Rode Hard and Put Up Satisfied”
http://randialexander.com/