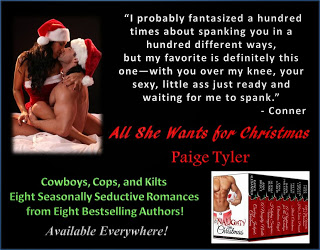 ALL SHE WANTS FOR
CHRISTMAS
by Paige Tyler
As she sipped her eggnog, Hayley realized the conversation
had gone from what they were giving their boyfriends and husbands for Christmas
to what they hoped their boyfriends and husbands were going to give them.
“Monica and I were just talking about that the other day,”
Lyndsay said.  “We’d really like to drop
the kids at our parents’ so that Ryan and Cole can pamper us for an entire day.
Breakfast in bed, followed by a bubble bath for two, then a nice, long full-body
massage, and a romantic candlelit dinner.”
Genevieve rolled her eyes. “Sounds boring to me.”
“That’s just because Lyndsay forgot to mention the part
about the mind-blowing sex,” Monica said. “We’d get to that part at some point.”
The redhead shook her head. “If you’re going to ask for the
perfect Christmas present, you need to think big. I’d want Chase to whisk me
off to a private island somewhere, rub my naked body down with oil, then make
love to me for hours on end out on the beach while the waves rolled over us.”
When Hayley and the other girls laughed, Genevieve gave them
a disbelieving look.
“Come on,” she said. “I can’t be the only one who has kinky
Christmas wishes!”
Hayley blushed and hastily sipped her eggnog so her friends
wouldn’t see how red her face was. She wouldn’t exactly call making love on the
beach kinky—at least not compared to the fantasies she’d been having lately.
Just thinking about them made her pulse quicken.
“Well,” Jill said, giving them a mischievous smile. “I’ve
been thinking about how much fun it would be if Philip tied me up and had his
way with me.”
Hayley almost choked on her eggnog. She wasn’t the only one
staring at the blonde-haired girl in disbelief. Lyndsay, Monica, and Genevieve
all looked just as surprised by the other girl’s admission.
“You have to be kidding,” Monica said.
Jill shrugged. “What can I say? There’s just something that
turns me on at the thought of being bound and helpless and totally at my
lover’s mercy.”
Hayley could only gaze at the other girl in wonder. Well,
this was definitely a side of her normally reserved friend she’d never seen
before.
“So,” Genevieve said, sipping her wine.  “What about you, Hayley? What’s your kinky
Christmas fantasy?”
Hayley shifted on the couch, suddenly extremely aware of her
friends looking at her. “Um…” she stammered. “I don’t really have any.”
Jill laughed. “You must. We all do.”
Hayley tucked her long, dark hair behind her ear with a
shrug. “Nope. I’m pretty boring, I’m afraid.”
“I find that hard to believe,” Genevieve scoffed.
“Me, too,” Monica said. “Come on, Haley. We all told what we
want for Christmas. How about you?”
Beside the other girl, Lyndsay was grinning. “You know we’re
going to wear you down you until you tell us.”
Hayley couldn’t help but laugh. She normally wouldn’t have
succumbed to their friendly pressure, but the rum in the eggnog had her feeling
much less inhibited than usual.
“Okay, but you have to promise that you won’t think I’m
weird,” she said, then hurried on before she lost her nerve. “I’d like Conn to
spank me. I mean, I’ve never been spanked before, so I’m not really sure if I’d
even like it, but every time I think about him putting me over his knee, I get
so excited.”
Hayley held her breath as she waited for her friends to say
something, but they were all staring at her in astonishment. She felt her face
go red.
“Oh, God,” she moaned. “You do think I’m weird. Forget I
said that, okay?”
Jill shook her head. “We don’t think you’re weird at all. At
least I don’t. I’m just surprised. Not by the fact that you get turned on by
the thought of Conner spanking you, I mean, but that you’ve never been spanked
before.”
“Me, too,” Lyndsay and Monica said in unison.
Genevieve nodded over the rim of her wine glass.
Hayley looked at them incredulously. “Wait a minute. All of
you have gotten spanked by a guy before?”
The other women nodded.
“You’ve really never been spanked?” Lyndsay asked.
Hayley shook her head. “Never.” She frowned. “I guess that
means I really am weird since it seems I’m the only one who’s never had my
bottom reddened.”
She grabbed a snowman-shaped sugar cookie from the plate on
the coffee table and took a bite as she curled her feet under her. How could
she be the only one missing out?
Hayley had first discovered her secret desire to be spanked
several months ago. She’d been flipping through a fashion magazine at the hair
salon when an article caught her eye. It’d been a story about fulfilling your
wildest bedroom fantasies, and though she’d skimmed through most of it, she
stopped when she came to the part about spanking. According to the article, many
modern women found being put over their lover’s knee for a spanking incredibly
arousing. Admittedly, Hayley’d been shocked at the idea at first, but the more
she’d thought about it, the more intrigued she was by the notion of getting
spanked. Since then, she found herself daydreaming about it all the time. But
she could never see herself asking her husband to spank her. It would be too embarrassing.
“So, why didn’t any of you ever tell me that you were into
spanking?” she asked after a moment.
Jill shrugged. “I guess we all assumed you’d done it, too.”
Hayley’s brow furrowed. “Well, I haven’t. And now that I
know you girls have all done it, I’m jealous. Tell me what it’s like.”
Her friends all looked at each other as if trying to decide
who wanted to go first.
Website: https://www.paigetylertheauthor.com
Blog: http://paigetylertheauthor.blogspot.com
Facebook Profile: http://www.facebook.com/paige.tyler.9
Facebook Author Page: http://www.facebook.com/PaigeTylerAuthor
Twitter: http://twitter.com/PaigeTyler
Pinterest: http://www.pinterest.com/paigetylerauth/
PushPage: http://www.pushpage.me/PaigeTylerAuthor
Amazon Author Page: http://www.amazon.com/Paige-Tyler/e/B0036MS0ZG/ref=ntt_athr_dp_pel_pop_1
Subscribe to my Newsletter: http://eepurl.com/BBrEP