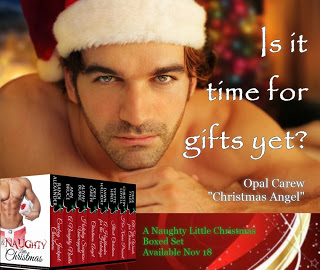 Excerpt of “Christmas Angel” by Opal Carew (writing as
Amber Carew)
A loud clatter jolted Nicholas Berringer from a sound sleep.
He sat up and shoved his fingers through his hair, pushing it back off his
face, waiting for any other sound to give him a clue as to what had awakened
him. A clunk, definitely from the next room, sent Nick scrambling to his feet.
He rushed to the bedroom door and cautiously pushed it open. He fully expected
to come face-to-face with an armed burglar.
To his total surprise, he stood
gazing at an angel.
He blinked, then shook his head.
The beautiful woman standing in
the middle of his living room wore a white gown that glittered in the
moonlight, with soft waves of pale blond hair floating to her hips, and wings
of downy white feathers that looked so real he could almost swear they were a
part of her.
“Who are you?” His voice
came out in a whispered tone, full of awe.
What was wrong with him? Bowled
over by some woman dressed in an angel costume who had broken into his home!
He drew up his shoulders and
demanded, “What are you doing here?”
Her large, luminescent eyes
blinked a couple of times.
“I … do not know,” she
said in a lilting French accent.
Her words, like a half-forgotten
melody from his childhood, washed over him in gentle waves. That voice stirred
something deep inside him.
Damn. He had to shake himself out
of it! She might look like an angel, but Nicholas didn’t believe in angels. In
fact, he didn’t believe in much of anything, especially when it came to women.
“What do you mean, you don’t
know? Do you always walk into other people’s apartments in the middle of the
night?”
Her fingertips grazed the velvet,
paisley cushion on the arm of his burgundy leather sofa as she glanced around
in bewilderment, then her fingers clutched the back of the couch as if needing
the support to keep standing.
“I’m sorry. I didn’t mean to
intrude.”
He stepped toward her and her eyes
widened and she stepped backward and bumped into the tree, which started to
topple sideways. Nicholas leaped forward and grabbed it just before it knocked
over the stained glass lamp on the occasional table. He set the tree back in
place.
She seemed a little inept to be a
thief.
Maybe she’d gone to a Christmas
party—some costume affair from the look of her outfit—and had a little too much
wine.
He retrieved two glittering glass
ball ornaments, which had rolled across the taupe carpet and bumped against the
raised hearth of the fireplace, then re-hung them on the tree branches.
He surveyed her face—heart shaped,
with a pert little nose and full, inviting lips—and the bluest eyes he’d ever
seen. Wide and bewildered.
“Do you live in the
building?”
“No, I do not think so.”
She stepped forward and stumbled
on the hem of her skirt. He reached out and caught her elbow so she wouldn’t
fall and she leaned against him for support. The warm softness of her body
against his sent his hormones into an uproar.
He eased her to her feet and
released her immediately, concentrating on reigning in the tumultuous effect
she had on him.
Her lips turned up in a delicate
smile.
“Merci.”
Despite the powerful sexual effect
she had on him, she seemed quite fragile. An intense feeling of protectiveness
he’d never known he possessed surged through him. Her effect on him certainly
was unusual.
He guided her to the sofa.
“Why don’t you sit down and I’ll get you a drink?”
She lowered herself onto the couch
and he fetched a glass of orange juice from the kitchen. Brandy might have been
better, but he didn’t know what, if anything, she’d been drinking already.
He handed her the glass, then sat
down on the chair beside her. They sat quietly for a few moments while she
sipped her juice.
“You live here alone?”
she asked.
“Yes, that’s right.”
She rested her hand on his arm.
Warmth seeped into him at her gentle touch.
“I think being alone is not
something you like.” She glanced at him with luminous, blue eyes and their
gazes locked.
He wanted to protest, wanted to
deny her words to himself, but he couldn’t. It was true. He wanted a woman in
his life. A partner who would give his life meaning, give him a reason for
coming home at night, but his fear of being hurt overrode that need.
“Christmas Angel” by Opal Carew
www.OpalCarew.com
http://facebook.com/OpalCarewRomanceAuthor
http://twitter.com/OpalCarew