I have to say Paige Tyler knows how to write a book about a sexy zombie. Hot sexy Drake Parrish fights is inner zombie in this combination of paranormal, romance with a pinch of suspense DEAD SEXY is a great mix. A bonus no brains were eaten! Doesn’t mean other things weren’t, Ms. Tyler gives a whole new meaning to being eaten by a zombie in these steamy scenes.

Simone Kent, author, has writers block when her friend suggest using a consulting editor, Drake Parrish although reclusive he was the best. Reluctantly Simone gave it a try to her surprise she and Drake hit it off. When Simone asks Drake for coffee he is stunned. After 8yrs of hiding he’s not sure what to do but with the helping hand of his best friend Beck he takes the chance. Drake is only a zombie part-time the problem is he just doesn’t know when it will happen.

Unfortunately Drake and Simone’s happiness is short lived when the walking dead arrive!

I have to say that we are definitely given a new idea of what sexy is in this new take on the zombie world and I loved it! If they could all be like Drake Parrish, I think I would be just fine with a zombie invasion! 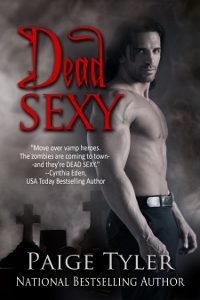