I’m so excited to announce that I’m part of another Cowboy Boxed Set with the same amazing authors from the original Cowboy 12-Pack that hit the New York Times Bestseller List! This one is called 12-ALARM COWBOYS, and as you can probably guess from the title, the book all feature hunky firefighters who are also cowboys! Who doesn’t like that?! 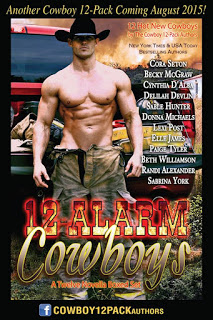 My contribution to the set is called REKINDLED, and it’s the first book in my new series, Dallas Fire & Rescue.

Things are about to get hot in here…

When firefighter Jax Malloy gets called out to battle a blaze at a hotel in the middle of the night, he doesn’t expect to find the sister of his best friend and fellow firefighter in need of rescuing. He didn’t even know she was back in Dallas.

Skye Chandler has always had a crush on Jax and is ready to be more than friends. All they have to do is survive an overprotective brother who just doesn’t get it, and a psychotic ex-boyfriend who’d rather see her dead than with another man.

“Lieutenant, this is Malloy,” Jax shouted into his radio. “Tory and I are going up the east side stairwell. We have a report of people trapped on the upper floors.”

“Roger that. Watch yourselves up there.”

Running up steps while wearing a self-contained breathing apparatus, helmet, and fire-resistant turn-out suit that weighed an extra sixty pounds wasn’t exactly fun, but as a firefighter, Jax was used to it. He automatically controlled his breathing so he could conserve as much air in his SCBA as possible, and kept humping up the smoke-filled stairwell. The fire was already eating through the walls above him, and the ceiling didn’t look like it was far behind. The hotel had ten minutes tops before it was completely devoured by flames.

He and Tory almost tripped over an older man down on his knees on the third-floor landing. His equally older wife was at his side, urging him to get to his feet. The woman’s shoulders sagged with relief at the sight of them.

Jax was all set to help her while Tory assisted her husband, but the woman waved his hand away.

“There’s a young woman up on the fifth floor. She helped us down, then went back up looking for other people,” she said, her voice hoarse from the smoke. “I can walk down. You go find her.”

Jax glanced at Tory to see him pressing the mask of his air pack against the old man’s face. Splitting up once you went inside a burning building wasn’t smart…but sometimes it had to be done.

His fellow firefighter nodded. “Go. I’ll get these two down by relay if I have to.”

Giving Tory a nod, Jax sprinted up the stairs. A moment later, he heard Tory’s voice on the radio, saying that he was coming down with two, while Jax was heading up for another.

By the time Jax reached the fifth floor, he knew the chances of finding anyone alive up there was slim. All public places like this were supposed to have sprinklers and water deluge systems, but if the hotel had them, they weren’t working. He could feel the heat from the flames even with all his gear on, and knew the air was getting hot enough to sear lung tissue. He kept going, though. He’d seen miracles too many times to give up on anyone.

Ten steps later, he almost stumbled over a woman lying on the floor. She had a wet bath towel over her shoulders, and another draped over her head. Smart girl, he thought as he crouched down beside her. He was half afraid he was too late, but then the woman coughed. Wrapping one arm around her, Jax gently pulled her up into a sitting position, then took off his mask to place it over her nose and mouth, pushing the button on the regulator to dump extra air into it.

He would have preferred to wait to see if the woman was able to breathe, but he couldn’t risk it. The building could give way any minute. So instead, he got the straps on the mask over the girl’s head as well as he could with her long hair, then scooped her into his arms and headed for the stairwell.

The smoke burned his throat like acid as he carried the girl down the five flights of stairs, but he ignored it. Another crew of firefighters were heading up as he came down, and he gave them a nod as he maneuvered around them, then through what was left of the lobby and out the front door. Damn, fresh air never tasted so good.

“Malloy. Out of the building with one rescue,” he called over his radio as he hurried over to the collection of Dallas Rescue vehicles and regular ambulances set up on the far side of Jacobs street. There were at least a dozen other patients already there, sitting on gurneys or on the ground. Most had oxygen masks on, getting good air into their lungs. Jax saw the older couple he’d left with Tory in the stairwell, but there was no sign of the other firefighter. He’d probably already gone back inside.

Alec McIntyre, one of the paramedics from Jax’s station immediately ran over, a green oxygen tank with a mask kit already attached in his hand. Jax gently placed the woman on the ground, then turned off the valve on the top of his tank and took the big face firefighter’s face mask away. Alec quickly replaced it with the smaller medical mask. The woman was aware enough to get her hands around it and press it firmly to her face, breathing deep.

“I’ve got her,” Alec said, already checking the woman for burns and other injuries.

Jax was about to turn around and head back to the burning hotel when the woman flipped her hair aside to fit the oxygen mask more closely to her face. Jax stared, stunned.

He was sure he was wrong even as he said the words. No way could the slim, curvy girl sitting on the curb be the little sister of his best friend and fellow firefighter, Dane Chandler. Three years younger than them, Skye had spent most of their childhood running around behind them wanting to be included in everything they did. He hadn’t seen her in years, not since he’d graduated high school and moved away. Skye had only been a freshman in high school then, all skinny arms, long legs, knobby knees and sharp elbows.

The woman blinked up at him, her big, blue eyes going wide as they filled with recognition. Damn, it was her. Little Skye had grown up, and even through all the dirt and grime he couldn’t miss the fact that she’d become one hell of a beautiful woman. 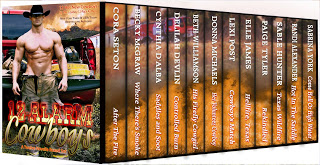 AFTER THE FIRE by Cora Seton
When a series of fires keeps bringing him to her door, a firefighter must uncover his ex-girlfriend’s secret or risk losing her forever.

WHERE THERE’S SMOKE (A Cowboy Way Novella) by Becky McGraw
Cowboy Austin McBride follows a herd to a new town, but firefighting is his passion, so he applies at a local station. Standing between him and the job is a blonde bombshell who thinks she’s a shoe-in.

SADDLES AND SOOT by Cynthia D’Alba
Rancher and volunteer firefighter extinguishes a grass fire accidentally started by the town’s sexy temporary veterinarian but there’s something about her that ignites a fire inside of him.

CONTROLLED BURN (Cowboys on the Edge, Book One) by Delilah Devlin
Rancher and volunteer firefighter assigns himself to watch a reformed firebug during a controlled burn but she lights the fire inside him instead of the dead grass around them.

HIS FIREFLY COWGIRL by Beth Williamson
When an arson investigator returns to her hometown she clashes with the firefighter cowboy who broke her heart. Embers turn to sparks between a cowboy and his firefly cowgirl.

HER VOLUNTEER COWBOY (Book 6: Harland County) by Donna Michaels
Sparks reignite when one-nighters reunite. Can the firefighter/Guardsman convince the reforming bad girl she’s worth fighting for, or will she leave before he finds the courage to volunteer his heart?

COWBOY’S MATCH by Lexi Post
When a cowboy firefighter works a fire at a nudist resort, he’s sure his ex-girlfriend, the bookkeeper, is to blame. But as he investigates her, his gut tells him he’s going to get burned.

HELLFIRE, TEXAS by Elle James
A Cowboy-Volunteer Firefighter helps a runaway city girl put out a car fire only to find himself embroiled in a hot little mess of the mob persuasion.

REKINDLED (Dallas Fire & Rescue, Book One) by Paige Tyler
A hunky firefighter rescues his best friend’s sexy sister from a hotel fire set by her psychotic ex-boyfriend who’d rather see her dead than with another man.

TEXAS WILDFIRE by Sable Hunter
Honored VFD hero is no angel. In love with his Captain’s wife, all hell breaks loose when Titan learns Makenna is abused. The firestorm their love ignites is so intense no one will emerge unscathed.

HOT IN THE SADDLE – Randi Alexander
When a rancher/volunteer firefighter is injured saving the life of a female stockcar racer, she stays to pay her debt of gratitude. Will he regret risking his life when he learns why she came to Texas?

COME HELL OR HIGH WATER by Sabrina York
When offered a second chance to seduce his high school crush, cowboy/fireman Cade Silver cannot resist. Despite her resistance, he is determined to win her, come hell or high water.